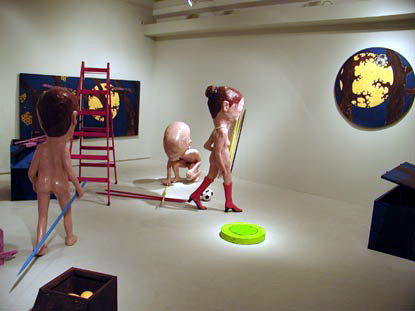 Nadav Weissman | Behind the Fence

Behind the Fence was also presented:

The installation consists of paintings, sculptures and objects.

It seems they are a family. They occupy the same space, and yet they seem apart, oblivious of each other. Everyone is going his or her own separate ways, all in different directions. There seems to be no communication among them. Perhaps there is a suggestion that the men are working on the same task, but they hardly know about it.

They are all like cartoon characters, and they look as if they were taken out of an animated film, cast off from the pages of the Sunday paper comics. Resembling grown up fetuses, their heads are disproportionately bigger than their bodies.

They are naked, but there’s nothing sexual about them, nor does any shame or harshness come with their nudity. If anything, what might trouble us as viewers is not their lack of clothes but the suspicion that these characters are possessed of an innocence, a virginity of spirit that we might violate or dishonor. But, in truth, they don’t seem to be aware they are naked.

They exist as if they were natural forces. Though at times they seem to be comic creations, they project moments of pathos and alienation, moments of loneliness, of lack and loss.

There is something guarded and afflicted in their silence. There is something…melancholic, disappointing, in their paused activities, in their held routines.
They seem to be outside, in the backyard of the house, behind the fence. Here, time doesn‘t exist, but it has to be evening; there is a full moon. It could be summer.

The entire scene can be read, not only as an echo of a lost opportunity, whose disillusion weighs with equal suspense. It can be seen, not only as a simple fantasy or make-believe, but also as a world the artist creates with the despairing, compulsive imagination of a poet.

It is not a narrative; it is a state of mind. And this, indeed, gives both a terrible immediacy and a sense of existential mystery to the work. For this work is not about events. It is, perhaps, a work of greater themes; maybe a work of grief, of how –-naked– we encounter and bargain with unavoidable suffering.

In this work, Nadav Weissman shows himself a master of the poet’s art, a master of sympathy, humor, detachment and deep lyrical insight into our life’s lot and into the closing off of our experience and communication.