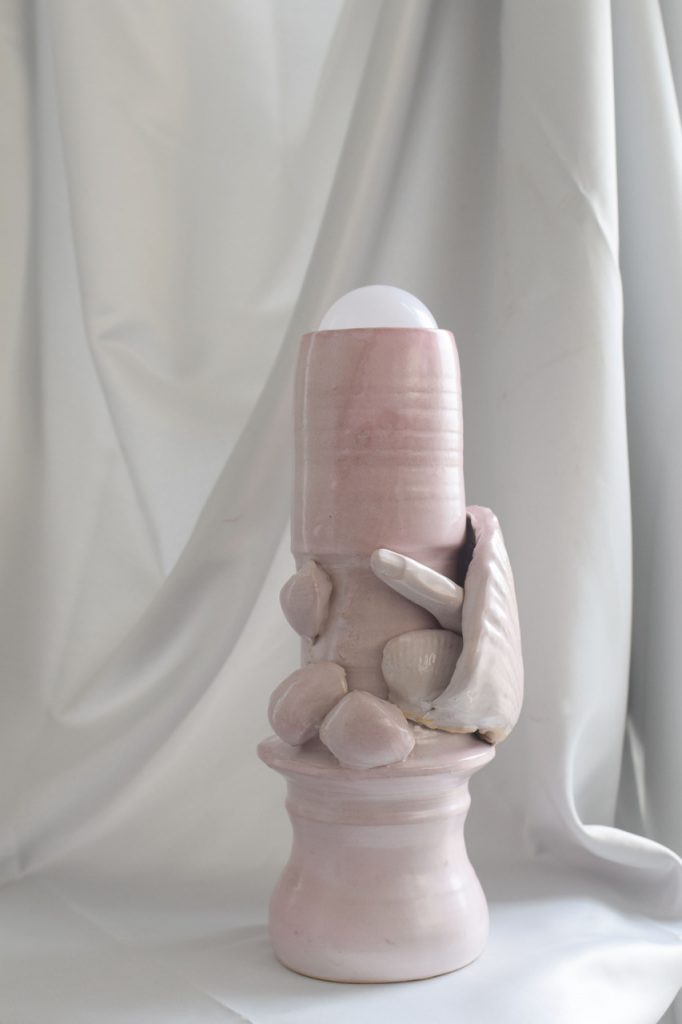 Dana Yoeli’s solo exhibition ‘Crypt’ stretches upon two floors and consists of four parts of drawings and sculptures. In Medieval tradition a crypt was a space usually set underneath the floor of a church or a castle, and used mainly as a burial site containing sarcophagi, coffins or relics. The crypt is here used as a conceptual model for examining the ways in which the past presents itself in the present – as a hidden secret or a code to be deciphered. Yoeli examines everyday cultural and ideological coding mechanisms, which present tradition as something harmonious and natural, when in effect, like the crypt, it draws on displaced sources, now organized in a structured space.

One part of the exhibition is a pencil restoration of ‘The Lion Hunt’, a famous hunting painting by the known Baroque artist Rubens. Yoeli cuts the original painting into eight separate parts; due to the arbitrary cutting, the restoration process does the opposite of recovering the image, and instead produces a destabilizing effect. It reveals the way in which the beauty and drama of the painting are a part of a cultural mechanism which makes this violent scene easy to digest. However, a recurrent look at the complete painting, with awareness to the violence it depicts, allows for its humane moments to reveal themselves – the blurring of lions and humans, hunters and hunted.

Another part of the exhibition consists of a series of colored pencil drawings based on botany books. While the books were meant to provide scientific knowledge and displayed a sort of ideal plant, Yoeli’s drawings are based on photographs of mundane flowers, leaves and twigs that she picked up in a trip to Germany. The plants’ detachment from their origin is expressed visually in the way the image emerges on paper, as if out of nowhere. Here as before the artist uses a scientific tool meant to provide an objective view, but in order to arrive at an intimate moment.

The final parts of the exhibition are a model on the central floor and its full scale counterpart on a separate floor. The installation is made of ceramic sculptures set on fabric as a still-life. They depict the artist’s hands sculpturing themselves; they are also relics of the ancient Greek figures, a “monument” to the missing hands of the classical sculptures. The objects are hand-built and wheel-thrown; glazed with shiny metallic smooth glaze, as to intuitively associate with organic materials, albeit destructive ones such as oil or toxic metals. Instead of gaining a sense of orientation from seeing both the actual object and its model, the viewer first sees the model as though it were the source, so that viewing it full scale is disrupting and dislocating. The sculptures are on a 1:1 scale, simultaneously a “home décor” piece, and a kind of an uncanny theatre set.

Dana Yoeli (B.1979, USA), is a multidisciplinary artist, working and living in Tel-Aviv. Yoeli holds a BFA and an MFA from the Bezalel Academy of Art and Design, Israel, and from HAW, Hamburg, Germany. She has exhibited numerous solo exhibitions in museums and galleries around the world, including: the Herzliya Museum, Bialik House TLV, Chelouche Gallery TLV, CIRCLE-1 Berlin, Artists House TLV and more. Her group exhibitions include: The Tel-Aviv Museum of Art, Kunstraum Kreuzberg/Bethanien Berlin, Haifa Museum, MOBY Bat-Yam museum, KUBUS Gallery Hanover, GSA Glasgow and more.