03.04.1975
Chelouche Gallery
Yodfat Gallery
Art that aspires to abstraction and the abstract has abandoned not only the totality of narrative components, but also the view of the art work as a direct presentation of experience. The artist’s experience is perceived as a motivation which has to be processed and adapted to “the pure painterly values” that are the only legitimate tools of the craft of art.
Read more >
Visit Artist Page > 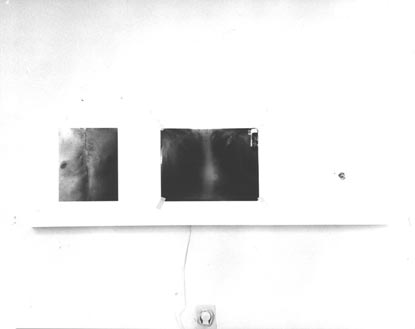 Encounter With the Horror of Death

Art that aspires to abstraction and the abstract has abandoned not only the totality of narrative components, but also the view of the art work as a direct presentation of experience. The artist's experience is perceived as a motivation which has to be processed and adapted to “the pure painterly values” that are the only legitimate tools of the craft of art. The reaction against the abstract in the past two decades has gradually changed these axioms. The branches that are termed “personal mythology” and “Body Art” have put the focus of the artist's activity on himself, and have made his body, his figure and his actions the raw material of art.

Gideon Gechtman strides confidently in this direction of self-exposure. He does not hide behind aesthetic or design-like images and sophisticated hints. Rather, he seeks to center his exhibition on a strong and significant personal experience that has a most general resonance and touches everyone of us.

This experience is the openheart surgery undergone by the artist tow years ago. It is presented at the exhibition on two levels – one concrete and the other allegorical.
The concrete part contains several components: a quasi-authentic hospital report of the history of his disease is displayed. The report is accurate in every detail, except that it also includes a number of biographical details which are not generally included in a report of this kind, but they give the viewer general information about Gechtman's life' family and sufferings. Beside it hang various documents connected with the operation, photographs of the hospital, the bed and the staff, an x-ray photograph of his chest in which the artificial valve implanted in him is clearly visible, a photograph of his chest with the scars of surgery, and a real mechanical valve. A tape-recorder incessantly plays the sound of his heart-beats. Here, too, stands the bottles of urine which he exhibited two years ago. Then this exhibit looked like an irksome and affected idea. Now, in the context of the surgery and in light of the fact that this is the same urine that Gechtman collected in the hospital on the doctor's orders, the work looks authentic and strong, and its meaning is different.

The encounter with the pathological in art is generally a strong one (and perhaps it involves one of the important motives for our need of art). Hence comes the tension that accompanies our walk through the exhibition, as in the background we hear the heart – beats, and the whole exhibition is an encounter with the horror of death. Human life, here, adds up to jars of medicines, bottles of urine, the mechanical process of opening the chest and then closing it up again, the general repair of the heart pump. Gechtman reinforces our sense of the inhumanity involved in the medical activity of doctors, through the alienation and the avoidance of any dimension of sentimentality. This is a cold and detached documentation. Gechtman borrows the serial principles of science – the technique of sorting, cataloguing and recording – and presents precise records of the quantities of food, liquids and medicines he swallowed, and, concurrently, the quantity of urine accumulated in the test – tubes, as though he were not a human being but a digestion pipe.

The allegorical part is exhibited as a kind of reconstruction of the surgery experience by means of indirect images. One of the sharpest experiences of the hospitalized patient is the feeling of helplessness and affront. Doctors, nurses and sanitary workers do what they like with him, move him and lead him, and his will power and his capacity of judgment are nullified due to his absolute dependence on the mechanisms and the ceremonial customs of this microcosm. This is possibly the most miserable and bestial level of human life, in which all his concerns and desires are subject to his physical existence, and his only occupation is “to live”. The body ceases being a tool by the aid of which one act, and becomes the purpose itself. These are the feelings that Gechtman sought to depict through the scene of the shaving. The shaving of the pubic hair is one of the ceremonies of the medical rite, and in this more than in anything else, he claims, he felt the helplessness of his condition. This process is depicted in a series of large photographs (in 1:1 proportion). In the first, he stands completely naked, with his arms raised in surrender, or, perhaps, hinting at crucifixion. Afterwards, different parts of his body are seen at different stage of shaving, and in the last picture the first scene returns, except that now he is completely shaved, on his head, his eyebrows, his arm-pits and his pubis. We have here a reconstruction (of course fictional) of the ritual of humiliation and sacrifice. The nakedness displayed to the eyes of all is part of that feeling of affront in the hospital, where the patient is no more than a mass of flesh and thus loses all intimacy. The quantity of his daily secretions becomes public information and a subject of supreme importance for his life.

This double allegorical process is presented even more sharply by means of a video-film which documents the process of shaving through all its stages, without intervention or directing. True, the camera-man overdid the use of the “zoom” and of focus on secondary details, and the film should have been cleaned of these irrelevant parts. More to the point, however, relevant use has been made here of this medium. After one seen the film, the photographs gain in impact. Evidently, still photography cannot compete with the degree of fidelity to reality made perceptible in moving photography.

This exhibition also gives us a new understanding of Gechtman's earlier works, where what was emphasized was the processes of decomposition of various objects, such as rope, a mass of lead, etc. in retrospect, the morbid dimension that was latent in these now stands out. This time Gechtman has decided not to hide behind fictive images, and has dared to openly send his hands into his aching wound. In this lies the power and the significance of this exhibition.