01.05.2010
- 19.06.2010
Gallery
Chelouche Gallery
Curator: Nira Itzhaki
The exhibition “Four Photographers” holds a dialogue between two sorts of looks; the external look which appears in the works of Miki Kratsman and Gaston Zvi Ickowicz, who deal with documentation of place, of scenary as a social representation caryying political implications. The second sort of look is the internal one that is reflected in Carmela Garcia’s and Melanie Manchot’s works, who use the photographic practice to examine the personal and the private, while dealing with issues of femininity and intimacy.
Read more > 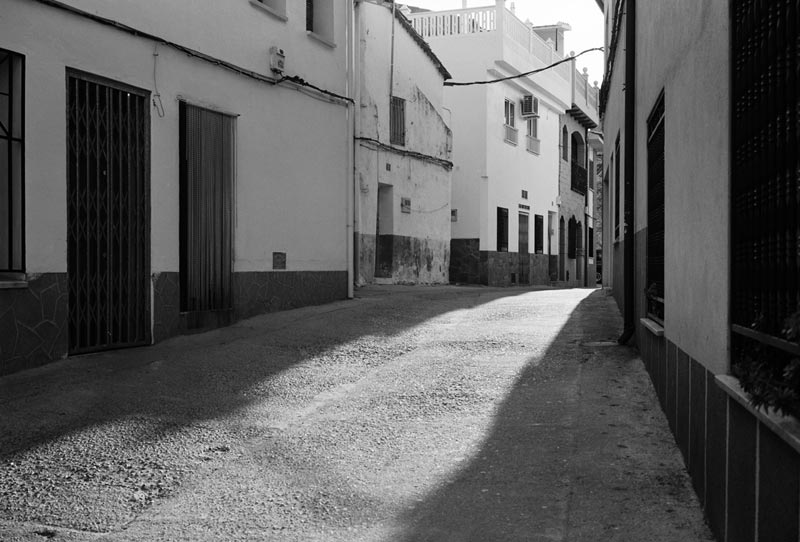 The exhibition “Four Photographers” holds a dialogue between two sorts of looks; the external look which appears in the works of Miki Kratsman and Gaston Zvi Ickowicz, who deal with documentation of place, of scenary as a social representation caryying political implications. The second sort of look is the internal one that is reflected in Carmela Garcia‘s and Melanie Manchot‘s works, who use the photographic practice to examine the personal and the private, while dealing with issues of femininity and intimacy.

In the series Deleitosa, Miki Kratsman traveled in search after the American photographer W. Eugene Smith to the Spanish village Deleitosa. In 1950 Smith published a visual reportage in the famous Life magazine. The series, which in time was titled “A Spanish Village”, was shot in the Extremaduran village of Deleitosa. This work defined the “photo essay” genre and even more recorded an indelible image of life in Franco’s backward, rural Spain. In Kratsman’s series from 2007 the reality reflected is rather disturbing: a modern town with aspahlt streets but without the inhabitants that had given life to Smith’s images. Deleitosa was exhibited as a solo project at ARCOMadrid, February 2010.
Kratsman was born in 1959, Argentina and immigrated to Israel in 1971. His photographs appear regularly in “Ha’aretz” newspaper in the column “The Twilight Zone” on which he is signed together with the journalist Gideon Levi. Since 2006 he presides as head of the photography department of Bezalel academy of arts, Jerusalem. Kratsman has exhibited in numerous shows in Israel and throughout the world.

The photographs by Gaston Zvi Ickowicz were taken in Mount Herzel, Jerusalem in proximity to Israel’s Commemoration day and Independence Day. The pool photographed in the works is a memorial monument of the navy. In the days prior to Commemoration day, teens from the youth movements are cleaning and preparing the site for the formal ceremony. The photographs document the day before and the day that follows the ceremony, and by that they create a perception of crumbled statehood.
Gaston Zvi Ickowicz, born in Buenos Aires 1974, immigrated to Israel with his family in 1980. MFA graduate from Bezalel Academy, winner of the Gerard Levi award for young photographer, 2008 on behalf of the Israel Museum. His work has been exhibited in numerous exhibitions in Israel and abroad, among it at Tel Aviv Museum of Art, The Israel Museum in Jerusalem, Haifa Museum of Contemporary Art and galleries in Europe and the U.S.A

The Spanish artist Carmela Garcia photographs only women. The women appear in front of sublime landscapes, that correspond with the the romantic scenary painting that is attributed mostly to men. The women stand in the scenary or lie in it, it is not clear where they are coming from and where they are facing. Garcia follows anonymous photographs from more naïve periods, and reproduce the gesture, the ambiance and the manner, while she’s changing the meaning and context of the original look.
Carmela Garcia, born 1964 in Spain, has been exhibiting since 1999. Garcia exhibited in prominent art centers and museums as the Reina Sofia Museum, Madrid, MUSAC in Leon, Espacio Uno, and in the far east – Shanghai and Japan.

The photograph by Melanie Manchot is taken from the series Liminal Portraits. The series was made with Manchot’s mother on locations which position her in a border space between public and private. The work aims to play with our understanding of beauty, the acceptance – or denial of the body once it no longer performs or conforms perfection. At the core of the work is a collaborative approach, which aims to make the subject as active as possible in her own representation.
Melanie Manchot, born 1966 in Germany, lives and works in London. In her first solo exhibition in Israel, Manchot showed the video work Shave, that was exhibited at the Venice Bienale the same year. In 2009 Manchot participated at the Thessaloniki Biennale, Greece and the Istanbul Bienale, Turkey.