08.09.2006
Gallery
Chelouche Gallery
Curator: Nira Itzhaki
The group exhibition of Israeli and international artists in the subject of masculinity. The exhibition shows video works as well as photography.
Read more > 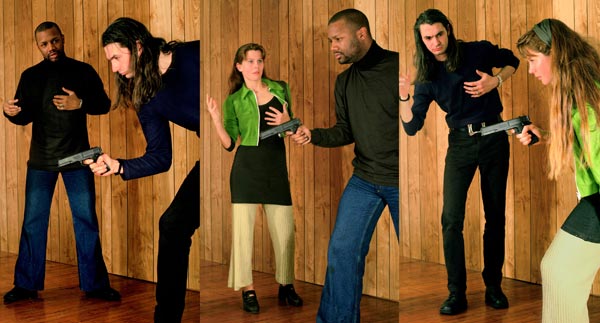 The exhibition GEVER GEVER at the Chelouche Gallery is a group exhibition of Israeli and international artists in the subject of masculinity. The exhibition shows video works as well as photography.

The expression “GEVER GEVER” (according to Rubik Rozental comprehensive slang dictionary) describes a number of distinctive masculine characters, and is generally spoken with irony. This phrase had become most recognized following the satiric show “Erez Nehederet”, turning the concept of masculinity from an expression signifying power and control to a narcissist, ridiculous, funny and pitiful. The exhibition reflects on this notion of masculinity from a critical- ironic point of view.

Txomin Badiola (born 1957, lives and works in Bilbao, Spain) is one of Spain’s most important and well-known contemporary artists, and recently exhibited a solo show at the Gugenhaim museum in Spain. Badiola, who exhibited a solo show at the Chelouche gallery in 2004, returns to exhibit here with his work Triangle, from the series “Family Plot”. This photograph deals with the narrative aspect of the masculine identity. On one hand there’s the melodramatic way in which actions are directed within well-know conventions, much like scenes from different cinematic types: the western, horror films, gangsters’ films or soap. On the other hand an unexpected and alarming sensation arises. Men are somewhat of a decoration to the action taking place in the scene, which puts them in a ridicules and absurd light.

Gal Weinstein (born 1970, lives and works in Tel Aviv) exhibits a sportive action which becomes an impotent action. His photograph Untitled shows an impossible physical activity. The absurd activity turns the action to a ridicules one.

Fahed Halabi (born 1970, lives and works on Majdel Shams) deals with questions relating to his identity in the complex reality in which he lives. Halabi, a new graduate of the Midrasha School of Art, refers in his video To You with Love both to his profession as a builder – a masculine profession – and belly dancing, which are looked upon in Arabic society (and in culture in general) within a context of a feminine stereotype. Halabi belly-dances dressed in his professional tool belt around his waist. He uses the tools as a symbol of social – political status, and the dance becomes a suggestion of hidden machoism and discussion about sexual- erotic identity, which fluctuates between feminine and masculine.

Melanie Manchot (born 1966 in Düsseldorf, lives and works in London) is one of the most interesting and upcoming artists in the young British art scene. In this exhibition Manchot shows a new video installation – Security. The work contains a single projection on a big screen as well as 7 small LCD screens, featuring 7 men who work in the most stereotypically masculine profession: security bouncers in posh night clubs in Ibiza. In the small screen these men are shown standing next to their working place, and in the big projection each of them removes his cloths until completely naked, peeling away the layers of power and protection his images showers upon him. The installation illustrates the transformation the men are going through, and the tension between strength and vulnerability.

Alona Friedberg & Limor Orenstein (both born 1970, live and work in Tel Aviv and Herzlya), in their video The Roll, try to turn a Volkswagen “Beetle” and throw it 9 meters away. Parallel to this they show the “Strongest Men in the World” competition – a power show of American body builders who look like bloated figures full with steroids. This show dissolves the boundaries of gender in a humoristic way, without any actual attempt to be more Manish then men. Winning or loosing means nothing, and so do the terms of femininity and masculinity, weakness and power.

Anan Tzuckerman (born 1966, lives and works in Tel Aviv) uses staged photography in order to check the masculine identity through the worship of the human figure. In the photograph Gym stands a muscular naked man holding iron weights and looking at his reflection in the mirror. It is a narcissist look that shows the man as a mocked figure, filled with self humor in regards to the image of masculinity.