06.03.2009
Gallery
Chelouche Gallery
Curator: Nira Itzhaki
The show exhibits a selection of works on paper from the seventies to our days, part of them, especially the earlier ones, is not familiar to the public and is now shown for the first time. The paper as a medium which allows various techniques and diverse qualities is being used as a platform for the current collection that roams between the political to the poetic, touching subjects of sex, gender and identity. The exhibition consists of works in water colors, pencil, ink and print.
Read more > 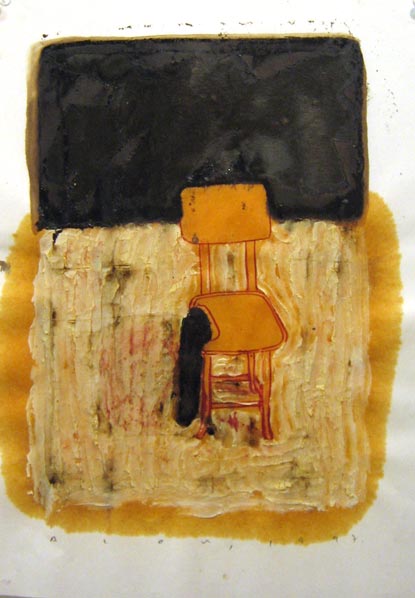 The show exhibits a selection of works on paper from the seventies to our days, part of them, especially the earlier ones, is not familiar to the public and is now shown for the first time. The paper as a medium which allows various techniques and diverse qualities is being used as a platform for the current collection that roams between the political to the poetic, touching subjects of sex, gender and identity. The exhibition consists of works in water colors, pencil, ink and print.

Nir Alon, Untitled, 1997, mixed media on paper, 30X40 cm each.
The main theme in Alon’s works is an instantaneous and focused description of an intermediate situation: an environment whose given condition is dilapidated: It is not stable enough to exist nor viable enough to be disregarded. The materials that accommodate the works are taken from a world of a tangible substance, like a chair or an easel, but these are always there primarily to serve the work of art. Nir Alon, born 1964 in Israel, lives and works in Germany since 2001.

Zigi Ben-Haim, Ancient Sailing Boats, 1978, from a sereis of 21 works, acrylic and rice paper on paper, 60×70 cm each.
In the seventies, Ben-Haim dealt mainly with textures of paper layers in various techniques. at that time he began his Sailing Boats project which combined paper, rope and acrylic. The works reflect a primary situation of sailing boats in ancient cultures and they create a visual language that relates to the alphabet letters. Ben-Haim, born 1945 in Bagdad, lives and works in New York since 1971.

Aya Ben Ron, Resuscitate (from Latin: raised again), monotype, drawing, thinner and toner on chrome paper, 38x40cm each.
Aya Ben-Ron is a multi-disciplinary artist who combines digital technology with traditional techniques such as print, drawing, sculpture and video. Her work deals with the repercussions of technological developments in science and medicine on man’s way of life and perception. Aya Ben Ron, born 1967, lives and works in Tel Aviv. Winner of Israel’s Ministry of Science, Culture & Sport Prize for 2008.

Guy Goldstein, Untitled, 2009, pencil on paper, 22.5X21 cm each. Manual, 2009, acrylic on paper, bounded book, clamps, 24X29X22 cm.
Guy Goldstein’s Manual is slashed in the middle and held by two clamps. A large and thick format that promises opulence of knowledge but is actually plain, and holds no information. The work uses paper as a platform for knowledge, different from a platform for an image, raising questions of relations between text and image the place of the book (and handbook) in an era of infinite digital information. In addition, Goldstein shows a series of drawings in pencil and lead on paper. Guy Goldstein, born in 1974, lives and works in Tel Aviv, Winner of The Young Artist Prize from the Ministry of Science, Culture & Sport for 2007.

Nadav Weissman, Untitled, 2009, pencil on paper, 21X24 cm, 21X21 cm, 24X21 cm.
Nadav Weissman shows a series of drawings that deal with the cleft between culture and animalism and the one between the point of view of the adult and that of a child’. Weissman’s works suggest a bitter-sweet strain, sore and ironic; the gaze on infancy is not nostalgic, but on the contrary, infancy is being depicted as an arena for invasive-realistic observation. Nadav Weissman, born 1969, lives and works in Tel Aviv, Winner of the Creation Support Prize from the Ministry of Science, Culture & Sport for 2005.

Pinchas Zinovich, Love Poems, 2005, aquarelle on paper, 109X72.5 cm each.
The aquarelles exhibited in this show are part of love poems series written by Zinovich in 2005. The formatting shapes have organic, biomorphic and sensual character, they are not easy to interpret but do hold a physical presence, continuously moving between the figurative and the abstract. Pincas Zinovich (1943-2007), Winner of the Minister’s Prize from the Ministry of Science, Culture & Sport for 2002.

Miki Kratsman, Lump, 2006, photo etching, variable sizes (maximum 37X43 cm).
The series of prints shown by Kratsman document the area of Gush Katif during 2005, just a few months before the media-covered evacuation. The series exposes a silent, abandoned and emptied out place. The swing of settlement, the wasteland flourishing, as if had evaporated or had never really been. The drama in these works is not in the ongoing occurrence seen in them but rather in the meaning derived from it. Miki Kratsman, born 1959 in Argentina, immigrated to Israel 1971. His photographs appear regularly in “Ha’aretz” newspaper in the column “The Twilight Zone” on which he is signed together with the journalist Gideon Levi. Head of the photography department of Bezalel academy of arts, Jerusalem.

Assaf Rahat, Untitled, 2008, ink and water colors on paper, 50X40.5 cm and 30.5X40.5 cm.
Rahat exhibits images of skulls and embryonic creatures in expressive and sensual works which examine masculinity saturated with impulses that exists in a mental world, mellow and laminal. Rahat corresponds with the history of art and mythology as part of his emotional and spiritual world. Rahat, born 1970, lives and works in Tel Aviv.

Yadid Rubin, Untitled, 1978, mixed media, 72X72 cm. Untitled, 1980, pencil and pastel on paper, 58X72 cm, 65X79 cm
In a continuous inquiry process, Yadid Rubin examines the way in which transformation of a “form of nature” (scenery, field, house) is made into a “work of art” and the way this art is being fixed as a representation of reality. In 1978, the art critic Amnon Barzel described: “Every wrok (of Yadid Rubin) constitutes a present situation, not of the world as it seems, but of the lack of possibilities to text a single formal solution of the object/space/scenery”. This show exhibits scarce works of Rubin from the seventies shown for the first time. Yadid Rubin, born 1938, lives and works in Kibbutz Givat Haim. Winner of the Minister’s Prize from the Ministry of Science, Culture & Sport for 2004.

Michal Shamir, Untitled, 2008, water colors and mixed media on paper, 21X29 cm each.
A selection of original works from Michal Shamir’s new Artist Book, Assif, just published. The drawings were made in mixed media that combines water colors, pencils, leafs of dried flowers together with bugs, flies and spiders. The works are a direct pursuance to Shamir’s occupation with themes of dying, fragileness and the disintegration of the body. The palm touches the aesthetic which regards the seamy. Michal Shamir, born 1957, winner of the Israeli Ministry of Culture Prize 2004, is currently showing a solo exhibition at Herzliya Museum of Art.