10.09.1999
External
Chelouche Gallery
The representation of objects – objects that are representation. They are representations of physical and mental processes, which help him to define his status as a young artist. Uri’s belonging to a family of artists – most of whom have already been recognized as part of the Israeli canon – make his strife to mature as ‘a young artist’ a rebellion and a triumph.
Read more >
Visit Artist Page > 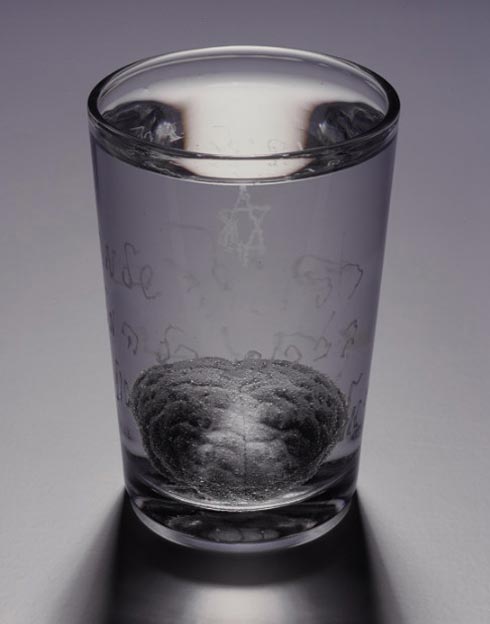 I first met Uri through his works, at the graduates exhibition of the department of photography at ‘Bezalel’ academy of art. I met him again a the exhibition t ‘Ho mama’ where his photograph “Mother turtle” was shawn; a photograph of a spacious arid desert, where the female turtle does not occupy the (empty) center, but drags herself along its margins. The photograph echoed the works of Uri’s mother, Bianca Eshel Gershuni. The dialogue between Uri and his mother through an artistic creation fascinated me.

First I saw works in which I identified a conflict between empathy and an impulse to depart. The works contained quotations from both of Uri’s parents works, but also a creation of something new. Uri chooses the representation of objects – objects that are representation. They are representations of physical and mental processes, which help him to define his status as a young artist. Uri’s belonging to a family of artists – most of whom have already been recognized as part of the Israeli canon – make his strife to mature as ‘a young artist’ a rebellion and a triumph. The strife is accompanied by internal wrestling. Beyond the external struggle that every young artist encounters in his path. Uri’s differentiation is manifest first of all in his photography, a medium that is his private ‘domain’. Here nobody will suspect him or make comparisons. This is not painting; this is not sculpture. This is photography, and it is his. The photograph of the glass of Gershuni the father is a symbol of the son’s identification and empathy. This choice also embodies quite a bit of Uri’s care and feeling of respect for his father, which derive from his awareness of his father’s status. In his graduation project he wrote: “ I try to keep a steady gaze. To look straight at the painting my father made in 1981. the painting features a child’s face, words that cry out ‘Soldier! Soldier’ and an inscription at the bottom: ‘For Uri’. The aura of the painting emanates from the unique, original, unrepeatable moment of touch. The aura is related to the distance. The painting remembers other sources and times, carrying the involuntary memory, the memory that transcends the cloak of oblivion”. Somewhere else he identified with “ the Liliputian in swift’s book, who had to make do with the inadequate means at his disposal to tackle the creature that was threatening him – to fasten him to the ground – only to realize that scale is a matter of angle of sight”. Somewhere else he implored “to challenge the aura…”. This exhibition is the challenge of an older and maturer Uri, who is therefore also softer and better reconciled. Uri’s choice of path and his artistic statements suggest departure and setting off, without the door-slamming of rebellious youth.

The works of the photographs of the ‘Altar design’ and the ‘Magic drawings’ are related to the term ‘Low art’ (as contrasted with ‘high’ or ‘canonic’ art), embodying not only defiance, but also finding beauty of a different kind, imbued with Uri’s longing for his childhood, and with acceptance. One of his most powerful childhood memories is associated with Juli M. gallery, Tel-aviv, 1979: “i grasp firmly a red crayon, and stand facing the wall, filling spaces defined by a contour line delineating one of the letters of the alphabet, making up words. I don’t see the text. I don’t reflect about its meaning. I feel the paint smearing my fingers, and smell its sticky smell. I am absorbed by the red splash that grows in front of me. My work deals with my contiguity to the wall, occasioned by the pastel crayon. It is a heroic moment – the quintessence of freudian acceptance and union. It is the only moment in my life when I could, or will, declare myself as a ‘painter’. A rather pretentious label considering my position, which is even more inferior than that of an apprentice or a trainee. I am a ‘painter’ not out of necessity, but by necessity of circumstances, due to biological relatedness, owing to the easy availability – an incidental hero”. The filled-in ‘altar’ design pattern revive the powerful memory (also found in the diptych, in the full empty rose pattern of the glass images). Mother is found in the photographs of the ‘containing’ objects. Sensuality and containing are qualities that identify Uri’s mother, Bianca. The glass and the pitcher, containing the empty and the full concurrently, maintain their basic qualities in the transition from empty to full, and vice versa. Here, too, we can find the process of departure, a natural and resigned departure, with the option to return to the point of departure over and over again. With mother he has a circular dialogue. I am inclined to think that Uri was under the influence of the unconscious when he chose representations associated with food and drink – the feeding axis connecting mother and child, child and mother. “nothing is more natural or elementary than beginning with the point of view of the nursing baby, suckling the wine of life. Seemingly, the baby’s universe is limited, consisting of nothing more than fatty tissue at the end of a nipple, a set of circular rings…a cycle of life and death. But at the corner of the eye it perceives a flash of light, a splash of color or a human smile. The circles expand, the world begins to unfold”. Uri brings us back to the picture of the nursing madonna, to mother earth, who is responsible mainly for the gift of life and protection. The container and contained are given further and new definition in Uri’s work. In the photograph of the glass containing the brain, the reflexive fusion of object, reflection and image is achieved. This work is indicative of the entanglement of cause and effect, of the reflected versus the reflecting, but it also maintains it. The glass (the anima) contains the brain (the ratio), yet it is also the base of the text, the soul and the insight. The feminine and the masculine have become of one piece. The words engraved on the glass are: “complete recovery thanks to all the angels – Uriel, Raphael, Michael, Nuriel and Gabriel”. The words themselves express the visual tension between the physical and the spiritual, between the metaphysical and the physical, between memory and reality – all of which represent contradictory forces trying to coexist in harmony. In this photograph, as well as in the other works, memory sustain the image, proceeding towards insight. “Memory” said Nietzsche, “drives away sleep. To fall asleep, to think up something new, one must forget”.