In Praise of Avalanche

29.11.2016
Chelouche Gallery
Tel Aviv Museum of Art
Curator: Anat Danon Sivan
Shai Yehezkelli’s exhibition “In Praise of Avalanche” features contemporary — Israeli and Mediterranean painting which swings between the abstract and the figurative, the comic and the tragic, the political and the theological.
Read more >
Visit Artist Page > 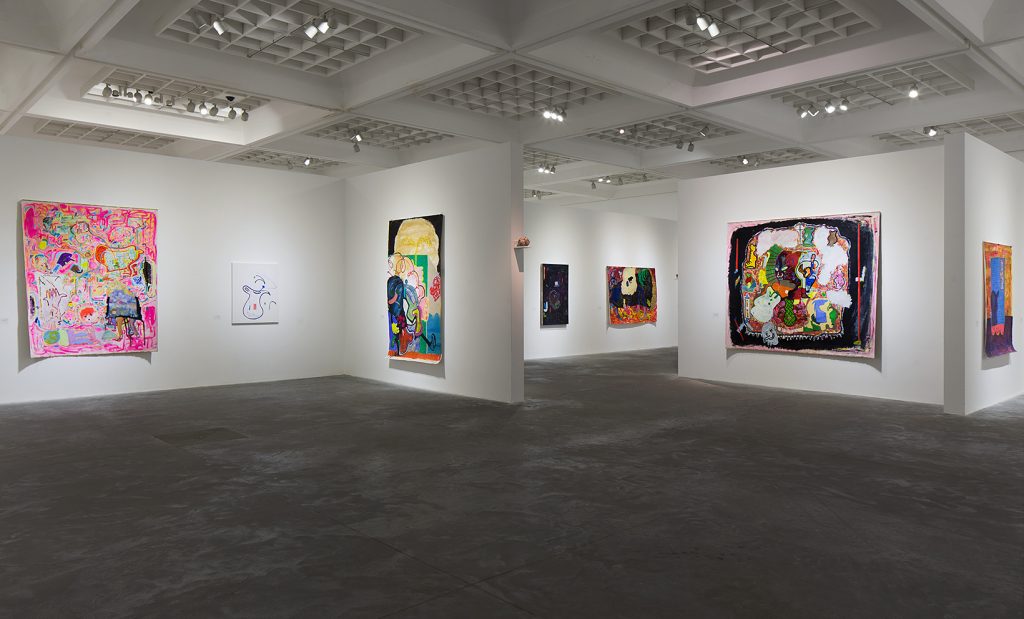 Recipient of the Rappaport Prize for a Young Israeli Artist, 2015

Shai Yehezkelli's exhibition “In Praise of Avalanche”
features contemporary — Israeli and Mediterranean —
painting which swings between the abstract and the
figurative, the comic and the tragic, the political
and the theological. Yehezkelli — recipient of the
Rappaport Prize for a Young Israeli Artist, 2015 —
unfolds a rich set of symbols based on religious
elements and signifiers of modern painting. Visual
medieval Christian images and shofar representations
hovering over al-Aksa mosque blend in the paintings,
forming a backdrop for the portrait of the artist,
grotesquely portrayed as weak and neurotic.
By juxtaposing excerpts of Jewish prayers and
Jewish motifs with Christian altars and Islamic
architecture, Yehezkelli adds yet another phase in
the metamorphosis of local painting, attesting to
himself as an eternal wanderer.

Many of Yehezkelli's paintings address the tension
and split between form and context, between
autonomous forms and differentiated forms that hold
meaning. His images are always both this and that, in
defiance of the laws of logic: a pot is also a head, an
eye is also an anus, shofar blowing is also sticking
out the tongue or smoking a pipe, and the gates of
heaven opening up in the painting are simultaneously
also the ground slipping from under one's feet.
Yehezkelli compares the metamorphoses undergone by
the image in his paintings to the “Chinese Whispers”
game. The image passes from mouth to ear, as it
were, and this act, with its inherent distortion of
meaning, enables the image to metamorphose almost
associatively. The linguistic distortion becomes a
visual distortion, and every form calls another form
to mind in a near-infinite process that alludes to
Surrealist automatism.

One conspicuous is metamorphosis in Yehezkelli's
works is that of the self‑portrait. At times it
appears in the figure of the Wandering Jew, with a
beard and a pointed hat, tying itself to diasporic
Jewish identity. Yehezkelli links the figure of the
Old Jew with that of the bearded artist, the “New
Jew” who is absorbed in painting or in observation;
pensive and helpless or alternatively — malicious
and impulsive. In other self‑portraits the artist
appears bald‑headed with a long nose, suggestive of
a smiley face.

Another key image in Yehezkelli's paintings is the
pot (Heb. kad), construed in the context of local
archaeology in the shadow of the Israeli‑Palestinian
conflict, as well as in the context of painting
itself, as a receptacle assimilating diverse artistic
and cultural influences. The trickle of water
emerging from it is comprehended as drops of paint
or an ejaculation, and is associated with painting's
erotic-rationalistic union, echoing Duchamp's
Fountain (1917), which is both a spring and a
fountain, both nature and culture.

In the past two years Yehezkelli has been painting
swift etudes on flawed earthenware, indicating
failure as a new point of departure for contemporary
painting. One of the ceramic pieces bears a pair of
palm trees with the inscription “local symbolism
pros and cons” between them, a humorous allusion
to the question of affiliation formulated by
Yehezkelli's perplexed painting.