26.03.2010
- 05.09.2010
Chelouche Gallery
Helena Rubinstein Pavilion, Tel Aviv Museum of Art
The body of work presented by Uri Gershuni is based mostly on studio photography of anonymous men. The photographs surrender great intimacy, which is signified by the peeling off of the clothing, the encounter’s location on a sofa or a simple bed with white sheets, the direct eye contact discernible in most cases, and, at times, by the performance of sexual acts.
Read more >
Visit Artist Page > 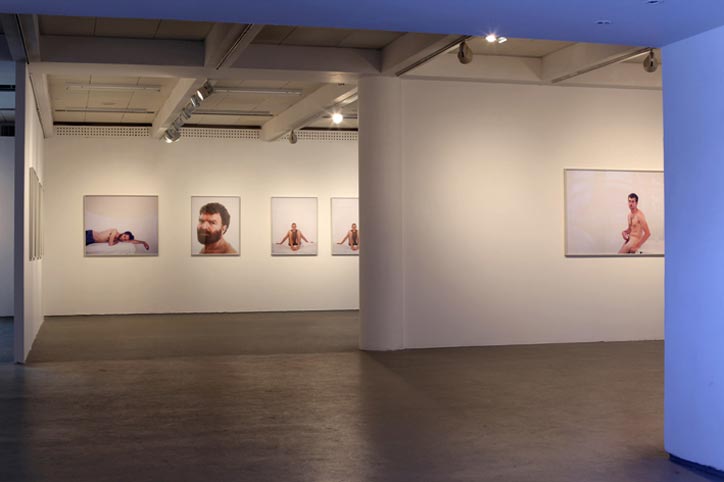 The body of work presented by Uri Gershuni is based mostly on studio photography of anonymous men. The photographs surrender great intimacy, which is signified by the peeling off of the clothing, the encounter’s location on a sofa or a simple bed with white sheets, the direct eye contact discernible in most cases, and, at times, by the performance of sexual acts. In some respects, the work strives to touch upon realms of non-speech, of silent communication, sensuality, and passion. In this context, the praxis of photography is revealed as a practice of acquaintance, even if the artist is already familiar with the figures. Through the act of photography Gershuni ostensibly attempts to get to know the photographed figures, focus on specific or fundamental aspects of their character, even seek a possibility of fusion, a potential moment in which a flickering identification of the self may elucidate itself in the portrait of the other. Since this is a moment made possible precisely through the analog nature of the photographic act, a moment eliminated by digital availability, Gershuni’s work process strives to create a duration, to construct an archeology of an image. In this context, his insistence on film photograph (all the works were shot on 6×7 film, digitally scanned, and produced as Lambda prints) is associated not with the quality or appearance of the result, but rather with the nature of the work process. Film photography disallows reflection in real time. Elements of uncertainty, horror, secret, suspension, exposure and revelation thus become inherent to the time frame. The time span passing between the moment of encounter and photography, and the moment of confrontation with the photographic product, which may take place months later, is a significant chapter in the process of work. This lapse of time makes not only for a renewed encounter of the artist with himself and with the subject of the work, but also for a fresh identification of details, minute and substantial alike, of which he was not previously aware.

Gershuni’s work is typified by formalist austerity, on the one hand, and a type of thematic wildness, on the other. It stretches the boundaries between the sublime and the abject, the erotic and the pornographic, profoundly exploring aspects of interpersonal tension or closeness generated under conditions of foreignness. Thus, it challenges the viewer by juxtaposing artistic, aesthetic, and moral questions, forcing him to confront his own private values which are often unformulated. The scrutiny of the notion of masculinity is performed through a broad range of gestures and postures, alluding to visual precedents such as the figures of Narcissus, Bacchus, and the like, in terms of the correspondence with “high” art (and especially with Italian Baroque painting), on the one hand, and through dialogue with quasi-“inferior” photography associated with the worlds of magazines, Internet, private or coincidental photography, on the other. The photographs themselves combine rigidity and softness, yielding and emptiness, great beauty and crudeness.

Born in Tel Aviv, 1970. BFA and MFA from the Departments of Photography and Fine Arts, Bezalel Academy of Art and Design, Jerusalem and Tel Aviv. Recipient of the Young Artist Award, the Israeli Ministry of Science, Culture and Sport (2000), the Young Photographer Award, Haifa Museum of Art (2005), and a prize on behalf of the Heskia-Hacmun Law Firm (2007). Gershuni has had solo exhibitions at the Artists Studios Gallery, Kav 16 Gallery, and the Midrasha Gallery, Tel Aviv, among other venues, and participated in numerous group exhibitions in Israel and abroad. Among his better known projects is the Clubbers series created between 2003-2005.