Something’s Happened to Us, Father

14.12.2017
Gallery
Chelouche Gallery
Curator: Avi Lubin
The show “Something’s Happened to Us, Father” grew out of the ongoing project Tomer Sapir has been maintaining over the last decade, under the title “Research for the Full Crypto-Taxidermical Index.
Read more >
Visit Artist Page > 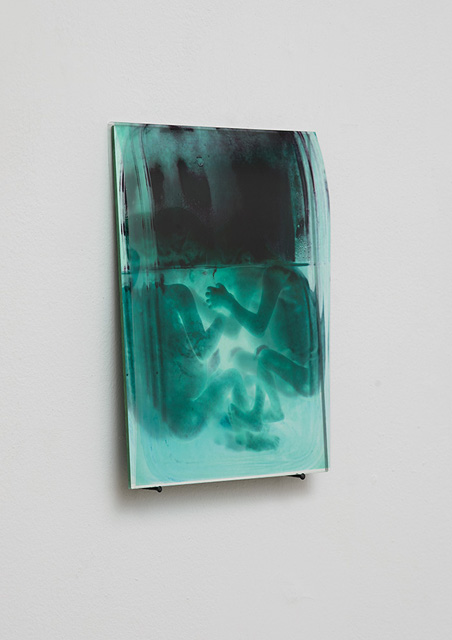 The show “Something's Happened to Us, Father” grew out of the ongoing project Tomer Sapir has been maintaining over the last decade, under the title “Research for the Full Crypto-Taxidermical Index.” This project began with the creation of fictional organic configurations and with questions of sorting and cataloging, and slowly turned to focus on the human presence. In his solo show “Ministry of Information,” presented two years ago at the Beit Hankin Museum in Kefar Yehoshua (curator: Neta Haber), his twins, Nimrod and Tamara, appeared for the first time in a video work (which is also in the current show). In this work, the children help Sapir extract a kind of death mask of himself from a mold. The death mask reappears in the current show in several variations, vertically and horizontally, hanging on the wall or laid on a pedestal next to a pile of gravel.

In the current show, home and family have become central, in terms of both subject matter and participants: the curator (the undersigned) is Sapir's partner; his death mask also appears in the space. Their common children appear in various works. The show creates an imaginary realm of “home,” with no distinction between the real and the imagined, the biographical and the fictional, the personal and the symbolic. This is a site-specific installation, reacting to the fact that the gallery is constructed like a multi-level apartment.

In one work, Sapir and his children are seen picking the fruit of the Chorisia tree, which he has been using as raw material over the last decade. Behind them is the cemetery in Kfar Sava, Sapir's hometown. In another work, he created two diptychs, each one comprising two images made of two transparent layers. In one diptych the children's images are laid over a portrait of Sapir's, resulting in graft, or a mutation. In the second pair, the order is reversed so that the image of Sapir is underneath the children's.

This interplay of faces is repeated in two short video works, shot through a filter in the Masquerade application, which can switch the faces of those recorded and create human grafts or mutations. In one of them, Sapir's son, five years old at the time, is seen as he enumerates his various skills (doing cartwheels and somersaults, 'farting' from the armpit, and intentional belching) – some childish testing of manhood. In the other video, which has given the show its name, the children's face are switched, but they are unaware of it. One of them suddenly says, “Something's happened to us, Father.” Right after that, the faces revert to their owners, like a mystical moment or the end of a spell.

The call to the father assumes meaning because of the filtering action through which the viewer sees the scene. The gap between what has happened and what the viewer sees makes it much more urgent. The call echoes another famous appeal to a father, the one which opens the seventh chapter of Freud's The Interpretation of Dreams. Freud describes a dream in which a boy says to his father, “Father, can't you see that I am burning?” In the background of the dream is the death of the child. The father, who had been sitting by his sick son's bed until the child died, fell asleep near the room where his son's body had been laid. Burning candles surrounded the body, watched over by an old guard, who had fallen asleep as well. After a while, the father dreamt that his son was standing next to his bed, gripping his arm and scolding, “Father, can't you see that I am burning?” He woke up to find that one of his son's arms was on fire.

As mentioned above, this dream opens the seventh chapter of The Interpretation of Dreams, probably the most important chapter in the book, in which Freud embarks on a new journey, one that has led to psychoanalysis. Nevertheless, Freud refrains from discussing it in any significant way. He explains that this dream is easily interpreted using the criteria described in previous chapters of The Interpretation of Dreams: the dream as the fulfillment of the father's wish to extend the child's life. According to earlier thinking, an interpretation might claim that the light (and perhaps the odor) emanating from the child's burning body have penetrated the father's dream and awakened him. And yet, Freud elucidates, in the attempt to interpret the dream, all paths lead to darkness. He leaves us with this resonating utterance and goes on to discuss a different topic: The Forgetting of Dreams.

Lacan devotes two chapters in his Seminar XI to this dream. He explains that the dream posits a paradoxical question about reality. The reality that awakens the father is not the same as the reality outside the dream (the smell of the charred body, the light of the fire, the sound of the falling candle) but rather the sentence from the dream: “Father, can't you see that I am burning?” The sentence presents a burning question about the father, who is unable to save his son in the reality outside the dream. What the father encounters in the dream is trauma: the agony of the father over the death of his son, whom he could not save. Waking from the dream allowed the father to avoid the encounter with the real trauma. The dream does not function here as the fulfillment of a wish, as implied in the earlier chapters in Freud's book. It makes the father face the Real, the trauma he cannot deal with outside the dream, the agony that cannot be expressed in words.

Like in Freud's dream, in Sapir's work the sentence “Something's happened to us, Father” points to the father's inability to function as Father in the real world, the world of wakefulness. At the same time, it is what enables the fiction by which the father can fulfil his symbolic role as the Father: in Freud – extinguishing the real fire that has started to consume the son's body, and in Sapir – returning the faces to their correct places and fixing the “something” that “happened to us.”