There is No Such Place

07.01.2016
Gallery
Chelouche Gallery
In his recent installation, Nadav Weissman creates an architectural space in which the merging between the individual and his built environment comes to a climax. A human figure is pulled up and down as the crumbling plaster reveals its wooden construction, as if it was the foundations of a building.
Read more > 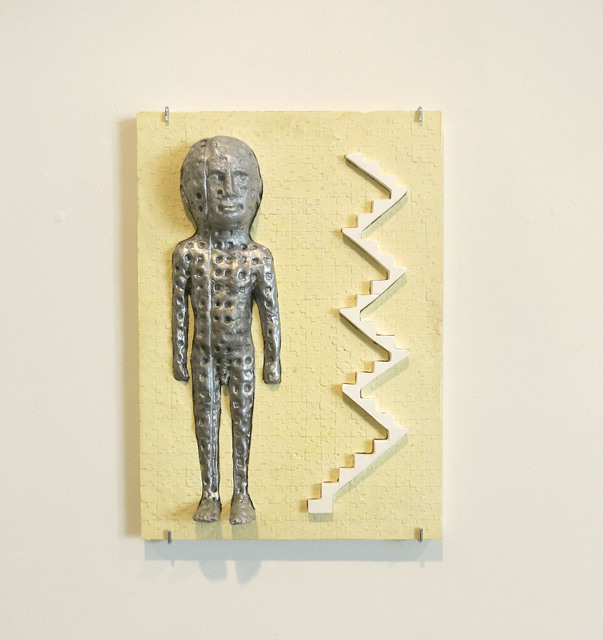 In his recent installation, Nadav Weissman creates an architectural space in which the merging between the individual and his built environment comes to a climax. A human figure is pulled up and down as the crumbling plaster reveals its wooden construction, as if it was the foundations of a building. Another human sculpture stands in the center of a square at a crossroads, as a monumental public sculpture. It is covered with a patchwork of quadrangles, as if it were a public housing building, replete with standard equidistant windows. Inside a human head, a stairwell is carved, a ladder towers from his ear and a track painted blue, with a boat carrying a scaled-down figure inside, is launched thereof. His facial features are replaced by the head of a horse, protruding as if it was taking over the inside of the human figure. Brown horses and boats recur in Weissman’s practice. Like the red trucks that appear in his previous works, they too subsist in a space of male journey, an allegory of sort on a coming-of-age process.

All these elements are both linked together and unlinked. Bridges and tracks join them together, yet are interrupted abruptly. The up and down, the sea, land and air, are inverted here: a yellow apartment block, its foundation posts elongated like aerial roots, towers up to heaven, serving as a container for a large, airborne rock. Tall ladders are towering above, made of discordant beams, retracting gradually. The installation as a whole looks like a playground gone awry, an adult luna park built in a space of magic realism.

Weissman strikes a delicate balance between surrealism and realism. His sculptures call to mind surrealistic images where human bodies whirl inside drawers, tables, chairs and animals. But a surrealistic reading of his work may prove too reductive. Realistic staples are necessary if surrealism is to be generated. For reality to be challenged, reality itself must exist. But Weissman’s installations exist in another sphere to begin with. They are suggestive, rather than realistic. Even when evoking reality, they are marked by a decidedly proportional or aesthetical distortion. The installation’s title, ‘There is No Such Place’, bares a paradox – this place simultaneously exists and is absent. It is a non-functioning model of a place. Along side the installation, wall pieces are included. These are playful reliefs, covered with a puzzle pattern, in which objects, well familiar from Weisman’s lexicon, are impressed. They seem like “Do It Yourself” kits, designated for building tiny models of the artist’s installations.

Models usually indicate clear proportions ratios. Weissman’s past figures and buildings reached the viewer’s knee-high, who was in turn invited to walk in and around their habitats and to watch them from above, as if he was a kind of Gulliverian observer. That is, a clear proportional ratio was maintained between figures, structures and viewers. In reality, buildings and objects are also built in direct relation to human dimensions. This mechanism creates a kind of mimetic identification between the individual and its built surroundings, on a physical, phenomenological level.
Yet in ‘There is No Such Place’, the non-existent place, normal proportions are distorted, while the mimetic impulse reaches an extreme: the figures and buildings receive the same size, the same representational translation. The body merges with the building, the track, the road and the staircase; man becomes a construction site. As soon as the home merges with its resident, a separation between outside and inside, which is essential for a sense of safety, cannot persist, hence no functioning can take place. The homeowner cannot set out to the world, as he is already inside it. Identifying oneself with objects, with buidlings, means turning still, coming to a full stop. And indeed, the mimetic impulse incorporates within the death impulse as well.

Nevertheless, it seems Weissman’s latest installation has withdrawn altogether from a static, full stop kind of state.
Everything is under constant growth, towering up to heaven, and a perpetual motion is present in the tracks and flying ways, reminiscent of utopic architecture simulations. Here, the a-linear, aimless journey of the Weissmanian hero is already inherent in his body, his home, himself. He does not venture far out, but rather digs deep down, inside his distended head.