Encounter with the Horror of Death 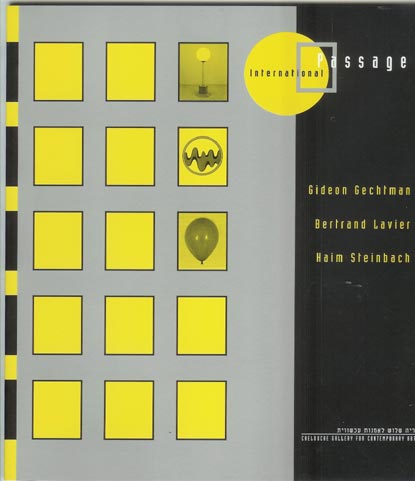 The joint exhibition of Gideon Gechtman, Bertrand Lavier and Haim Steinbach is the third project in the series of international art encounters “Passage” at Chelouche Gallery for Contemporary Art. The Project – begun in 1996 in collaboration with Dr. Lóránd Hegyi, the director of the Museum of Modern Art in Vienna – puts the emphasis on an international exhibition space where artists, who express themselves in a similar or parallel language, meet to hold a true dialogue in real-time. A two-way meeting-point. A place for cross-fertilization.

This is the first time Steinbach, Lavier and Gechtman meet in an intimate exhibit allowing for a discussion between them. This exhibition shows the results of dialogue, which is so lacking in this area. In spite of common meeting points – relation between object and image, origin and copy, real and artificial, “alienation”, use of daily objects, and the severance from their original context – all deal differently with the way of representation and how the real and its representation change roles.

With Steinbach objects are taken as is; while questioning the concept of originality, they are essentially arrangements and they “enable a kind of ‘museofication’ of objects, as if one can return them to their ‘objecticity’, and not only see them as symbols of themselves”. The slogans Steinbach exhibits, deal with what is missing when the theme or the product itself is absent. As they are painted on the gallery walls, they deal with the representation without ‘substance’.

In Gechtman’s case, the objects are dealt with. The representation of reality is done by copying it or by interfering with the object. The objects are not ready-made in the regular sense, they are perceived as such. Thus the gap between the original and its representation is created. In the works Gechtman shows, Moonshine, Levana and Moonlight Brick, the treatment of the ready-made is not only the treatment of the object itself, but also of the marketing-advertising system which stands behind it.

Bertrand Lavier combines daily objects in such a way, that each one can be something else or many things concurrently, a refrigerator, for example, can be a base, a painting, or a sculpture. In the exhibition Lavier shows “Walt Disney Productions”. These are enlarged photographs of “paintings” and “sculptures” “exhibited” in an “art museum” in a Walt Disney cartoon series. By enlarging them and turning them into photographs, he grants these virtual works an actual standing in the art world. He transposes a “modern” sculpture from the virtual world of Disney to a three-dimensional work, thereby providing it with a concrete existence in the world.