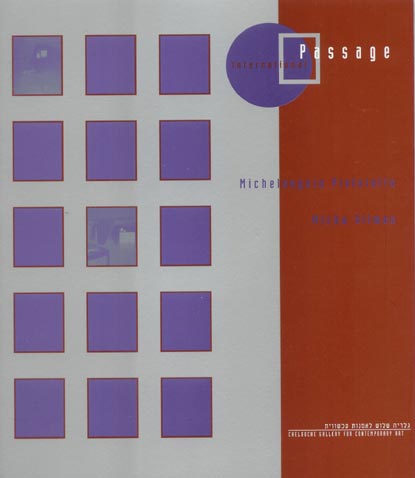 The joint exhibition between the Italian artist Michelangelo Pistoletto and the Israeli artist Micha Ullman is the fourth in a series of international “Passage” encounters at the Chelouche Gallery for Contemporary Art.
The project, which started in November 1996 in cooperation with Dr. Lóránd Hegyi, the director of the Vienna Museum of Modern Art, gives emphasis to the global exhibition space which becomes increasingly cosmopolitan and without borders, and serves as a venue for artists, who create in an adjacent, communicating and analogue language. This is a continuous artistic event, which strives to expand the exhibition possibilities by organizing joint exhibitions and carrying out a genuine real time dialog.

In this exhibition an interesting encounter is created between two international artists of the same generation, who combine local cultures with universal values.
Ullman, who has its roots in Israeli-Jewish tradition, is engaged with local identity since the 70’s, and over the years changed the local element into universal besides being constantly attached to everyday life. Past and present are also important elements in Pistoletto’s oeuvre, whose roots are in the Italian tradition. Two different and parallel cultures meet in one exhibition, and surprisingly have many things in common.

Ullman’s sand tables facing Pistoletto’s mirror works: The evasive and transitory reality, the doubt, the question and the uncertainty which raise apropos of observing and presentation modes; the connection between past and present and the flow of time – are all distinctly raised issues in the dialog between both artists. The involvement and reflection of the spectator in Pistoletto’s mirrors as well as in Ullman’s works, who in the past years has also incorporated glass into his work (Mirror in the Tel Aviv Museum of Art, Library in Berlin, East in the Israel Museum, and the sand tables in the current exhibition), has made the spectator an inseparable part of these works.

Future joints between both artists are the reflections, beauty and elegance on the one hand, and the Harsh, Sensual and Meditative on the other hand.
Ullman presents two glass-covered sand tables (Negative 1, Negative 2). Red sand is thrown from the ceiling and function as a light, “illuminating” and marking the traces of the tableware and the objects. The sand is the negative of the camera film and the missing photograph, i.e. the positive, is the memory, whereas the developing of the film is carried out in the spectator’s imagination. The tables are covered with glass, sealed and impenetrable, denying any access. An isolation-creating situation, as shown in the Library in Berlin, or in last year’s installation Sanday that was exhibited in the artists workshops in Tel Aviv. The work itself exists in the spectator’s imagination. Pistoletto’s mirror reflecting the spectator, and the mirrors which face each other also create an impenetrable world, which exist only in the spectator’s imagination.
The mirrors work shown by Pistoletto in this exhibition (Divided Mirror, Corner Mirror, Crown of Mirrors), deals with the dimensions of space and time. The real space behind the spectator becomes part of the fictitious space in the mirror/ thus, the mirror becomes the venue of both the physical and fictitious reality.

Both artists occupy themselves with the changes occurring in the perspective; with the inversions of interior-exterior, positive-negative; with undermining the reality and distoring the spectator’s ability to see in a given space. Ullman’s pit works created in the 70’s mark the beginning of this process through which the artist changed the spectator’s observing perspective. Then came the pit work performed by the artist in the 1980 Venice Biannale; the chair sculptures; the Library in Berlin (covered with glass, denying the spectator’s entrance, reflecting the surroundings and the movement of the spectator, who stands on top of it) up to the Sanday installation.
Pistoletto has begun to engage in the mirror perspective, in which every direction is being reversed, in the 60’s. His woks deal with the relationships between the figure painted on the mirror and the spectator. It deals also with the reflection of the spectator in the painting, as well as with the movement which gathers past and future up to the point where their existence is not certain any more.

The relationship between the painted object and its reflection induces an endless “creation” of mirror paintings. The past and the present merge and overlap one another on the surface of the painting. The mirror paintings turn to be the venue between oneness and multiplicity, past and future. The place where opposites meet becomes also the venue of the multiplication and the division of reality as being reflected in the mirror. In the pictures one can see forward backward at the same time.
In this exhibition everything turns to be a part of everything, everything is reflected in everything, Ullman’s works are reflected in those of Pistoletto’s, and the spectator’ being reflected in everything, becomes himself a walking “sculpture” in the gallery.
Both artists share the emotional and spiritual, as well as the physical and sensual experience. The perception of the passing moment in relation to the eternal on the one hand, and the tension between the concept and the action on the other hand, create remarkably exiting moments in this exhibition.

Two Artists in the “Passage”
By Dr. Lorand Hegyi

Micha Ullman and Michelangelo Pistoletto are both representatives of a spiritual, intellectual, reflective, as well as a sensual, material related art, which always places the context of the work of art and the artistic work in the tension area between action and contemplation and between the changing dynamic activity and the reflecting analysis. Micha Ullman represents the Israeli artists generation which became internationally involved. He paved the way for young artists, who neither built their ideology exclusively on the collective, optimistic ideals, which guided the state founders, nor exclusively on the – mainly European – rationalism and functionalism, but also on the often contradictory individual historical and political experiences. Ullman is an intellectual, who links western European cultural traditions with the newly shaped Israeli culture, which seeks its new identity and forms an authentic intellectual attitude. Ullman frequently travels between continents and countries, leading a constant dialog with various artists, and therefore is an ideal partner to his Italian contemporary Michelangelo Pistoletto at a meeting and dialog taking place in the “Passage”. Pistoletto, likewise, is an artist who emphasizes the importance of international encounters and cooperation with artists. An engaged personality, who wishes to deepen the relationships between continents and cultures, tradition and modern art, and between intellectual analysis and the already widespread total art. In his activity he links the ontological questioning with the critical, political attitude of the artistic work. Pistoletto reformulates the ancient and par excellence European question of presentation and representation in the context of contemporary art, and translates the idea of artistic work into the complexity of human work and life. By doing so, he depicts the western artist, such as Leonardo da Vinci or Marcel Duchamp, who concretized the inner and vocational problems of art always in the entirety of life. In this sense he intellectualizes the idea of art, and at the same time stands on the grounds of tangible reality, determined by historical events.

A joint presentation of their work gives the viewer an opportunity to compare and inquire the attitude of tradition towards the present, to examine transcendence and materiality, the essence of metaphor and the various functions of art such as activating, motivating, integrating. Furthermore, it opens channels of dialog between cultures and philosophical, ideological and religious strategies, and examines their ability to co-exist or at least live peacefully side by side. Thus, this exhibition turns into a real “Passage”, where artists and visitors, connoisseurs and art lovers meet, talk and begin a new, creative, ingenious relationship based on art.