Miki Kratsman – The resolution of the Suspect

The Politics of Space and Place

WHAT REMAINS TO BE SEEN 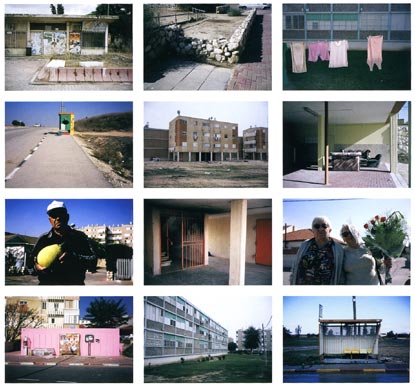 Inside Out. Contemporary Artists from Israel

At the center of the frame are torn sheets on nylon, bent iron bars, doors their locks torn out, the loose rope remains of a basketball and additional items that are not in use, pulled out of place, broken, lost. It seems that since Walter Benjamin wrote the thirties that sole paragraph about the photographs of Eugene Atget-“his photography is like a photograph of the scene of the crime. The scene of the crime too is empty of people. It is photographed for the need of circumstantial evidence.”-it is no longer possible to look at those landscape photographs of remains, dereliction and desolation without regarding them as crime scenes. However, an unbearable lightness often accompanies the use of this expression-“crime scene”-as if the mere look of a crime scene that became attractive in a way that discharge the spectator of the duty to ask questions about the crime, its culprits and circumstances.
Miki Kratsman's photographic work, based on almost two decades of photographing Palestinians living under Israeli occupation, doesn’t allow spectator this privilege. The spectator can always indifferently turn the page of the paper over, or whiz by any photograph he bumps unto, yet if he chooses to pause and observe, Kratsman's images will force him to ask questions, to wonder why is the soldier's head out of frame, why does his shoulder obstruct the view, why does the woman display her injury is not present by her own, why are the two midgets who are denied medical treatment look to the source of light that brings them out of darkness, why is the Palestinian kid covering his eyes, why the giver of the border is missing from the frame, why are the Palestinian detainees lined in a row, why is the desolation in Gush Katif so explicit months before the local inhabitants were evicted by order? Each photograph invokes a specific question that neutralizes the possibility of an abstract discussion of a “crime scene” as a photographic style, and encourages the association of what is seen in historical, concrete, political reality.
Kratsmman's photographs are unique in that each one expresses a complicated decision taken by him in real time, under demanding, difficult, conditions of such split-second spectacular violence, ongoing and daily, that seems to generate images reproducing over and over. Kratsman's decisions are both of the political and photographic order. They are alert to shifting reality, torn between the professional duty to photograph in any circumstance and the civil responsibility to not let his gazeobediently follow the agendas of media and political discourse, and remind us the occupation is always the background story for all events taking place. Hence the series of decisions rising out of the photographs: to place the Israeli soldier next to the weeping Palestinian kid, as directly responsible for his suffering, while at the same time cutting off his head and leaving it out the frame since his individual identity isn’t relevant; to show the soldier's shoulder obstructing the view to acknowledge the spectator that the photographer's viewpoint is depended and limited by circumstance; to keep a relative of the wounded woman next to her as a sign for the fact that it can not be taken for granted that anyone in any situation can look at the other's injured body, and that not all spectators enjoy the same status; to protect the child from revealing his identity; to drive the soldier away from the frame in a time when the abuse of the Palestinians diverges from the military operations and becomes a method sanctioned and run by a state; to not present the Palestinian as a random, passer-by victim but as someone that more Palestinians before and after are doomed to the same fate in the occupation's production line; to expose the authoritarianism of taking over vast spaces that belong to others, and the vanity in believing they can be turned into an oasis within a disaster-stricken area and be preserved as such while the smothering ring around the neighboring Palestinians keeps tightening . As the national agenda celebrated the “disengagement” as an inner-Jewish event during which people were torn out of their homes, and the images dominating the media were heart-jerking moments of uprooting, separation and banishment, Kratsman chose a photographic strategy of a crime scene, and to present the “disengagement” on the background of the overall context of the occupation. The series of photographs from Gush Katif that Kratsman presents are impossible to read disconnected from the sum of his work in the occupied territories, and only this continuity allows understanding what a crime scene is, what are its borders and inner logic. This series presents the potential for self-annihilation of those oasis points featured in the photographs, as places principally unable to sustain the lives of its inhabitants and doomed to deteriorate until totally emptied of settlers. The crime is not the emptying of the place but the series of acts creating this place as a crime scene that did not end with the place's foundation but is renewed on a daily basis by its mere existence, which turns the lives of its Palestinians neighbors to disaster.