Pedro Cabrita Reis | The Silence Within 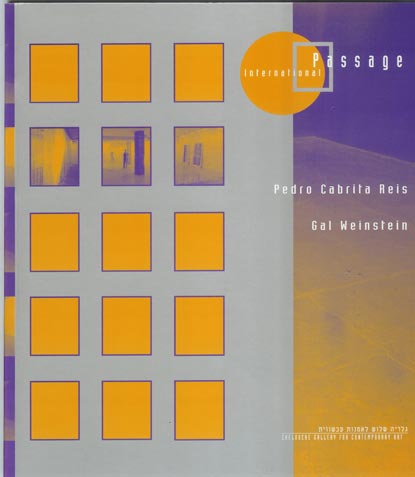 The joint exhibition of the Portuguese artist Pedro Cabrita Reis and the Israeli artist Gal Weinstein is the 5th project in the series of Passage: International Art Encounters, taking place at the Chelouch Gallery for Contemporary Art.
The idea behind the project, which started in 1996, is to organize joint exhibitions showing the work of Israeli and foreign artists who share a similar or parallel artistic language, which consequently would pave their way towards new representation possibilities in Israel and abroad, as well as maintain a genuine dialogue within the international world of art.
The artists who have exhibited within the framework of Passage are: Motti Mizrachi (Israel) and Patrick Raynaud (France). Zadok Ben David (israel) and David Mach (England). Haim Steinbach (New York), Bertrand Lavier (France) and Gideon Gechtman (Israel). Michelangelo Pistoletto (Italy) and Micha Ulman (Israel).

The current exhibition’s mutual installation comprised of works by both artists keeps a dialogue with the architectonic structure of the gallery. Not only has it transformed the entire space, but made the space an integral part of the work. Pedro Cabrita Reis (born 1956 in Lisbon, Portugal) has erected four red silicate pillars which join floor and ceiling. Three of them had been broken by violent hammer blows which made them look like archeological debris of part of a construction site. To the fourth pillar, which stands opposite to the Gallery’s entrance, a glass jug full of water is adhered with brown tape stripes. In another space within the gallery Cabrita Reis placed three large paintings. Gal Weinstein (born 1970 in Israel) has hung white transparent silicone drapes (sweeping the floor) and thus creating a magnificent transparent, illuminated curtain. They divide the gallery’s space into three smaller spaces, in which the pillars and Cabrita Reis’ paintings are placed.

The real space behind the silicone drapes turns into part of an imaginary space existing in the spectator’s eyes, whereas the drape becomes the meeting place of the physical and the imaginary reality.
The silicone drapes, resembling waterfalls or shining transparent beds, function as territory definers. The spectator has to decide whether or not to become physically involved in the work. The passage between the silicon drapes, which enable the movement from one space into another, turns the spectator into an active participant in the installation.

Cabrita Reis’ brick pillars and Weinstein’s silicone drapes deal with the relationship between art and architecture within the space and time dimensions, and raise questions about reality “fooling” space as well as doubts and uncertainty evoked by different viewing possibilities.

Both artists have chosen simple everyday objects and materials such as silicate bricks and silicone, which lack any special identity, and used them as components of their architectonic structures – sensuous and spiritual at the same time.
In their theatrical style, their humor, irony and lack of functionality both artists share a common language. The reflections, beauty and elegance contrasting the rigidity, sensuality and meditativeness create additional joints between these artists. Both deal with the deceptiveness of perspective, as well as the contrasts shown by inside-outside, positive-negative relations, and both attempt to weaken reality and blur the capacity of the spectator to see the real space.

The dialogue between both artists in this mutual exhibition within the framework of the passage series is so perfect, that the spectator could not distinguish one from another, for their work merges into one. This exhibition, in which everything becomes part of everything, creates a new range of associations open to various commentary and observation modes. This is the moment when the spectator moves from reality into a quasi non-site of a Zenic spirit of existence of its own.

An encounter between to artists takes place in the Passage, where they shall discuss their works as well as change ideas, views and experiences emerging from the mutual exhibition in addition to getting to know each other better. Pedro Cabrita Reis comes from beautiful, melancholic Lisbon that is built on many hills, looking over the endless ocean; Lisbon, with its narrow streets, high staircases and elevators hidden behind neogothic iron constructions, its delicate and elegant palaces, its slowly cruising ships on the ever undulating river Tejo; The city which is marked by its dainty, small, old streetcars, its sad sounding Fado music, and finally by its white and black inhabitants, whether Africans, Latin Americans or Europeans, who have borne the heavy burden of the history of Portugal, a once great empire.
Gal Weinstein, from the city of Tel-Aviv that combines the utopias of functionalism, rationalism, social justice, of free, democratic, sound collective life; The city which is known for its Bauhaus style buildings from the “white city” epoch, its ever lively streets rustling with beautiful young people, who (or whose parents and grandparents) came from the Diaspora to Palestine in order to build a modern nation; The city with its cafes, restaurants, nightclubs and sunny beaches, were families from Europe and Africa, Asia and America mingle together as a matter of course and a jolly mixture of languages is heard from all sides.
Portugal – with its capital Lisbon – which lies at the edge of Europe, has been shaped by three continents. The tiled and embellished house facades depict motives from Brazil, Angola and Mozambique, mixed with baroque as well as popular Spanish and Portuguese elements.
Israel – with its metropolis Tel Aviv, lies at the edge of Asia, between three large continents – Europe, Africa and Asia. In this city occidental and oriental philosophies of life from a mixture, whereby the occidental rationalism meets the oriental sensuality.
The history of Israel combines the three great monotheistic world religions and bears the heritage of the ancient world, with its old and classic, Hellenistic, cosmopolitan empires. Its destiny as a battlefield of many countries, religions, colonial empires and freedom movements connects also the medieval and modern world. Both countries  Portugal and Israel  are now sovereign states, however, their peoples are shaped by their long, multifarious, sometimes bloody, tragic and inconsistent history.
The art of Pedro Cabrita Reis and Gal Weinstein represents a sensible and attractive combination of both intellectual and utopian elements, and of direct as well as sensual elements that appeal the sensual experience. Both artists work economical and hedonistic at the same time, concretizing intellectual reminiscences of the Avant-garde as well as of antique cultures as shown in myths and great collective narratives. One could consider their oeuvre as a positive and present-day contribution to the new interpretation of the “Grand Narratives”, but on the other hand they try to reshape and actualize the modernistic strategies that originate from the Constructivism and Dadaism and from the intellectual agenda of the Ready-made. Their dialog in form of a mutual exhibition within the framework of The Passage offers the spectator a deeper look into their “Alchemy”, in which they deconstruct past symbol systems and assemble their parts in a totally new, actual and up-to-date multi-referential context.