Apollo and the Chimney-Sweeper

The Homes of Others 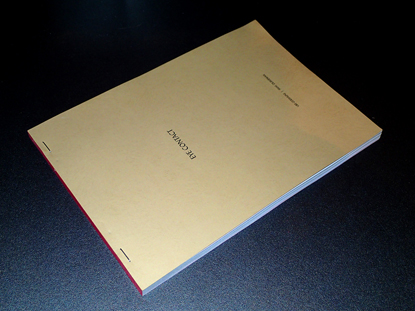 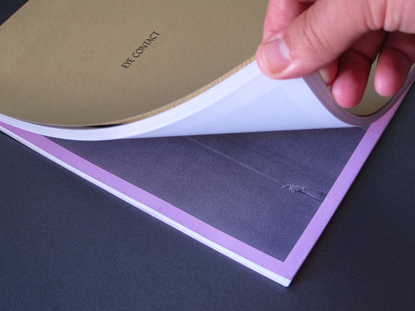 We shall hereby regard the eye’s generosity and the world’s unwilling consent.
We shall observe the eye contact – for the eye is cogently able to tie and connect things together, or to untie them and keep them apart, and is impressed with a nexus of ties seized in an instant, with blink of an eye, as an image captured on photographic paper. We shall hereby observe that which the eye saw, that which it has shut itself to, and that which it has cherished, naming it “apple of my eye”.
Leonardo’s eye, or the shut eyes of a lover; Oedipus, Tiresias, The Andalusian Dog; “Oh… a black eye, she had, light and shade clashed within it”. And so on and so forth… the apple of my eye.

The ocular association inherent in a work of collage finds its incarnation in E. T. A Hoffmann’s Sandman, who with his dull roaring voice exclaims “eyes here, eyes!” It is as though vision is of rupture born, by necessity; a rupture that equals a rite of mourning, and an extraction, which equals a rite of disengagement.
But what shall the eye extract from the world? Its indifferent bounty, surely? Take all that you can, and I am left none the poorer; paint, shoot, cut, paste: It is in you that the hollow grows bigger, it is in the orbit: “The Open Where Not To See.”
Tear and rupture are fundamental to collage. The challenge put forth by collage may relate to a suture line that unites, yet also disjoins, two components whose original nexuses may stand opposed (to the point that their original meanings are reversed).
The tear signifies the difference and secures the opening. For isn’t the story of an eye contact always the story of a distance that the eye seeks to overcome, wanting to reach forth?

Uri Gershuni’s choice of tying-up “evidences” from antiquity would naturally lead the eye unto that which has been torn, unto the stump. The contemporary eye looks at the fragmented sculptures of classical and Roman antiquity to see an integral whole. A Venus of Milo sporting a pair of upper limbs would thus present an anomaly. The shreds of the past, which gradually resurface in the present, generally exist as emblematic fragments, as vestiges of a greater cultural and architectonic edifice that once was, as relics that have been “cut” off the past and “pasted” unto the present.
Gershuni, by putting together these “incomplete” wholes, acts as an archeologist who renounces every attempt at restoration. The layering, so typical of the archeologist’s gaze, as well as the meticulous reorganization of life’s many strata, are cast aside in favor of a surface at once emptied and vigorous.

Here is a monumental figure, his portrait dominating the page: With his face strong and assertive, he is a masculine emblem that has been hollowed-out, or castrated, one would wish say, due to the eye and the story of the eye, but who still stands firmly.
Despite the hollowing-out, or because of it, the eye inquires after this man’s identity.
Who was this man? Why is his face so familiar? And so it wanders, floating between books (which equally possess this fluttering ocular quality, opening-closing-and-opening), as those ancient ships whose bows where adorned with stone eyes, so that they may look-on at sea.

The stone eyes of Maximinus Thrax look-on. The fascinatingly cruel presence of this Roman emperor, the first to have come from a barbaric origin, was the subject of countless studies, owing to its “mixed aspect”. The historian Theophylact Simocatta has called him “a centaur, the savage race of hybrids from the mythological past,” pointing to the “genetic composite” (or collage, to go further) that combined the “barbaric” and “civilized”, which has made him the protagonist of a discourse that extends between and integral racial purity on the one hand, and the fragmented and mixed on the other.

And the emperor indeed has eyes of stone that look far beyond, he indeed possesses this timeless gaze reserved for portraits marked with historical consciousness. Maximinus’ gaze can survive even its emptying.

The eye that survives its own perdition roams the works of Shay Zilberman. Its travel toward men whose gaze is barred forces it, as it were, to fulfill its sensing and sensual role, to follow this beautifully tailored suit made of papers tanned by the sun, to indulge in the considerable beauty of this man, to look upon it “as when a splendid object blazes forth at night,” to kiss his lips and caress his bristles – the fateful cue for severing the bonds of love.

Like an additional eye, the question of time ties itself within the work-texture of Gershuni and Zilberman. The male eroticism present therein echoes the pederastic myth, whose complex system of distinct rules were dealt with by Michel Foucault, under what he calls “the difficult question of precarious time and fugitive passage.”
The butterfly that appears in a boy’s portrait by Gershuni, just as the bristles that we see in Zilberman’s work, trace the delicate line beyond which a boy is considered too old to properly partake in amorous relations.

Like a clock pacing the minutes, the hair on the faces of Gershuni’s bearded men, as the hair that masks the faces of women in Zilberman’s works, is like a screen the descend to cover the world.

For what purpose must they have so many eyes? The Sandman collects them into a bag and “carries them to the half-moon to feed his own children,” who sit there in a nest and pick eyes gouged from children.

Gershuni and Zilberman also swallow eyes into the entrails of their works, by which they nourish the eye contact with the viewers.

In Zilberman’s works, the shut eyes constitute a viewer-Medusa to whom every gaze it receives ends with death or blindness. The missing eyes in Gershuni’s works, these mask holes, prepare the place for a “living”, naked eye – the eye looking back at them.
“Before I got my eye put out / I liked as well to see / As other creatures that have eyes / And know no other way,” writes Emily Dickinson. It seems that eye contact relates to the gift of seeing, the gift of eyes poured as a magic powder from an ancient vase:
“Well let the lad have his eyes and cry his share in the world!”