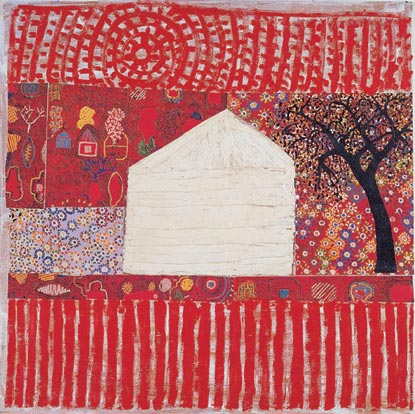 Alone in the artist's studio

While anticipating my arrival at his studio, Yadid Rubin did not apply a single brush stroke to the empty canvas in the center of the room. He resumed work the following day, when “absolute, clean quiet” once again dominated.

“If you tell me that you're coming, I can't work well,” said Rubin, 65, a painter from Kibbutz Givat Haim Ihud whose talent had gained him national recognition back in the early 1970s.

Phone bills? I'm not bothered by it. But I can't be in overdraft or owe someone, otherwise my concentration disappears.”

With curly dark hair streaked with gray, light blue eyes, biblical sandals and shorts, nothing in Rubin's appearance suggests that he is an artist of considerable stature. His regular half-day job as a pest exterminator in the kibbutz's cotton and corn fields is another contrast to the chic image of a soft-palmed artist with a beret.

But there is definitely something in Rubin's detached demeanor and jumbled speech which makes you suspect that he's no ordinary kibbutznik. While he busied himself with the kettle, I used the opportunity to scope out his intimate studio. It is completely sealed off. No sunlight, air or landscape penetrate – a sharp contrast to the vast expanses which characterize Rubin's morning job. It is not coincidental, of course, and is meant to eliminate confusion.

The canvases that fill every available space, however, capture the world just outside the studio walls: the kibbutz's open fields in a medley of geometric forms, cute tractors crossing paths, the sun, and the ever-present columns of cypress trees that celebrate the region's colors and light.

Rubin's interest in drawing was sparked at the age of 10, when he began sketching schoolmates and teachers. In his senior year in high school, he joined his parents on a mission to Austria for the Jewish Agency. It was there that he cut classes to frequent the Vienna Academy of Fine Arts (the school that had rejected Hitler), where he practiced model sketching and anatomy. Rubin's passion for drawing was put on hold when he enlisted in the IDF. Soon after his discharge, he was discovered by painter and teacher Avigdor Stematsky, and completed the four-year course at Tel Aviv's Avni Institute of Art.

His next stop was London's Royal College of Art – a privilege made possible by the Israel Students Scholarship Fund and loads of personal talent. Regrettably, the language barrier limited his stint at the college to six months, but the extended stay in London proved beneficial. But of all the schools he attended, the experience in Vienna was the most enlightening.

“Here [in Israel] when they talked about artists, they talked about something in the sky, like angels,” said Rubin. “There [in Vienna] I all of a sudden saw that [painting] is an occupation of totally normal people.”

Indeed, the life of an artist in a kibbutz community has never been a bed of roses. When tilling the soil and general survival predominated in the state's formative years, slapping paint was regarded as time-wasting idleness. Many good artists, noted Rubin, left their kibbutz “because they were pressured to work and abandon their art.”

On one studio wall, a rough pencil sketch which carries a dedication to Rubin and signed by Ori Reisman symbolizes the complex kibbutz-artist relationship. Reisman, a member of Kibbutz Kabri in Western Galilee, was a mentally-ill recluse shunned by his fellow kibbutzniks. His fame came posthumously, when his portraits of kibbutz members and landscapes generated tens of thousands of dollars on the auction circuit. Sculptor Yehiel Shemi, another member of Kabri, fared better. His success at selling his large iron statues gained him the support and admiration of the kibbutz community, and he even served two tenures as secretary. And there also was painter Moshe Kupferman of Kibbutz Lohamei Hageta'ot (he died a few months ago), recipient of the Israel Prize.

PERHAPS IT was good fortune for Rubin to discover the balance between the demands of kibbutz membership and the yearning for his art.

“I was given many things [by the kibbutz],” he said, “including support, materials and a studio. First of all, I always made a living. I would take 3,000 dunams of cotton, work all summer and bring them the salary. I found my niche and was very appreciated socially.”

Rubin won't admit to one undeniable factor that went a long way in the kibbutz's tolerance and support of his studio. Beginning in the early 1990s, his list of high-caliber clientele included banker Leon Recanati and business moguls Nohi Dankner and Doron Sabag. He refuses to disclose additional names, but whoever they are, they can afford to shell out thousands of dollars to decorate the walls of their villas and offices with naive portrayals of kibbutz life.

Reaching his present commercial success, emphasized Rubin, entailed a grueling path of learning, loneliness and adopting a unique style that went against the basic teaching of his mentors in the 1960s. The school of Lyrical Abstract headed by Stematsky, Yehezkel Streichman, Moshe Mukdi and Zaritzky “killed color and utilized poor materials.” Rubin's evolution came early in the 1980s, when he began treating his canvas with healthy dosages of oil paints that combine to give a glowing, dense colorfulness.

The artists who inspired Rubin are mainly Vincent van Gogh, Karl Schmidt-Rottluff and Andre Derain. Like them, he abandons drawing in favor of color, relationships and forms established by repetitive patterns. His insistence on painting the same landscape in endless variations may seem tedious, but his genius with color more than compensates. Strong colors, thick as stalactites, create what Rubin calls a “fertile texture,” and endow his creations with a feeling of richness and vivaciousness.

The clients love it, as do curators and gallery owners. Rubin's colorful tractors were given space at the Israel Museum and the Tel Aviv Museum of Art, as well as in Basel, Cologne, Stockholm, and Copenhagen. In the late 1970s, the Julie M. Gallery in Tel Aviv served as his prime agent, and in recent years it's the prestigious Chelouche Gallery for Contemporary Art.

True to his down-to-earth, modest approach, Rubin invites visitors into his studio for a first-hand view of his art – a fascinating opportunity to meet the man behind the scenes, and experience his work environment. There is no fee involved, but the visit is recommended only to those with an affinity for art who call in advance. Private drawing lessons are also available for groups of two to three persons. Not because Rubin needs the money, but because of his need for human contact.

“This occupation isolates you,” he confesses with a soft voice. “I want to teach people one day a week for the company. If I contribute something to them, then it will contribute to me.”