There is No Such Place

2005
The installation Black Lawn deals with wild and uncontrolled growth on a background of a deserted place. Two plants present this wild growth. The first is the climbing plant, which stands at the middle of the exhibition, full size, and connects between the gallery’s space on which it climbs and to which we enter through a pink wooden painted wall, and the “installation itself”, composed of a neighborhood of miniature and evacuated buildings, black lawn, lakes-puddles, beehives and three pupa-figures. 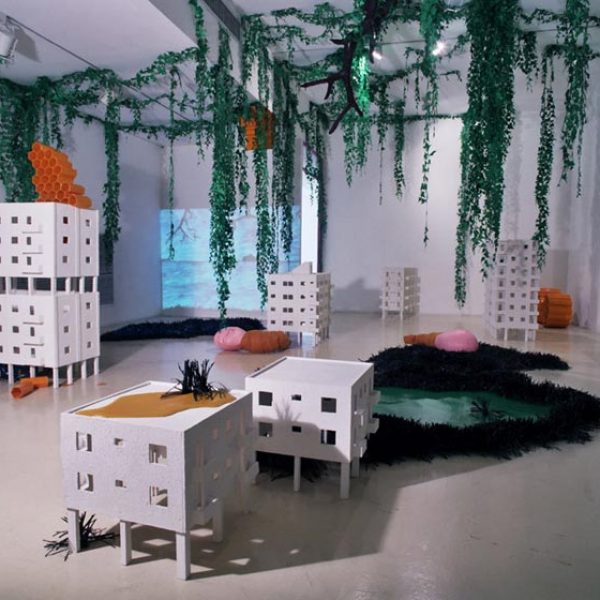 The installation consists of sculptures and objects.

The installation Black Lawn deals with wild and uncontrolled growth on a background of a deserted place. Two plants present this wild growth. The first is the climbing plant, which stands at the middle of the exhibition, full size, and connects between the gallery’s space on which it climbs and to which we enter through a pink wooden painted wall, and the “installation itself”, composed of a neighborhood of miniature and evacuated buildings, black lawn, lakes-puddles, beehives and three pupa-figures.

The relationship between the spaces is of past-present one. The space in which the exhibition is placed, the gallery’s space, and the pink wooden wall in their full-size represent the present, while the miniature neighborhood – with its images – represents the past.
The houses seem as if empty of all contents, and left like hollowed shells. The deserted neighborhood relates to something that was, but is now lost. The design of the neighborhood is based on hybrid of houses in Nave Shaanan, Haifa (from my past as a child) and those in Tel Aviv (where I live). The “shpritz” plaster on the external walls and the painting of the inside by synthetic-lime reminiscent of the 70th aesthetics in Israel.

As stated before, there are images of two kinds of plants in the installation. The black lawn for which the exhibition is named and the climbing plant. Both represent a culture of care and tending of the courtyards and gardens of the houses. These plants grew wildly in the exhibition – uncontrolled growth. The climbing plant creeps on and dominates the museum walls as well as on walls of the hollowed neighborhood houses and inside them. It spreads wildly without tending or clipping. The black lawn is not being mowed and thus grows wildly around the pond-puddles and in places not intended for it. The lawn is characterized by its black color that indicates its “unnatural” and unhealthy growth.
The beehives are also scattered in space, placed on the houses as if intent on conquering and presenting another kind of architecture purposed to occupy the neighborhood. In addition to the plants, the beehives bring with them the dimension of danger and seduction, and a measure of fear through parasitism. They emphasize the desertion of the place.
The climbing plant, the lawn and the beehives are aggressive, conquering and killing but simultaneously they produce a vigorous liveliness of growth and a savage beauty.

In addition, there will also be in the exhibition three figures. Two of them are fallen/resting on the floor. The third one has fallen on a black lawn carpet. Their bodies are covered by an ocher colored felt. The head of the figure is big in relation to the covered body, as if it also grew too much. The images seem to be pupas, the body cover indicates the potentiality of the body that intends to come out but its shape is still unknown.

The materials do not carry non-artistic contents. A part of my interest is hiding the material so it will not bring contents and will not arise feelings. The flora is made of paper. From a certain distance it seems real but close by it looks as if colored hurriedly. The pink wall is a tree painting on wood – again in order to hide the real material and produce a mental or a painted suggestion instead of it. So is the rough plaster “Tambourtex” (Shpritz) on the buildings walls in the neighborhood.

The main action that the plants images are made by, is that of practical work. Here it is worth seeing the ties between an action of a practical work and a suffocating action. Actually, the climbing plants image, the parasitism and the action by which it is made are producing a state and experience of suffocation.