2006-2008
Gideon Gechtman’s current exhibition at Chelouche Gallery completes the conceptual process that began with the Qassam missiles of Launching Apparatus presented at the Petach Tikva Museum of Art in 2006.(1) At the height of the Qassam bombardment of Sderot and the towns and settlements around Gaza, Gechtman presented three prototypes of silvery Qassam missiles alongside and on their launchers; 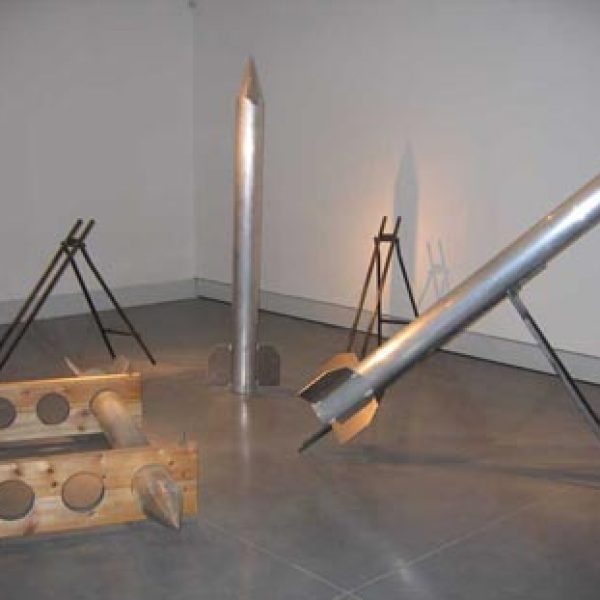 Gideon Gechtman’s current exhibition at Chelouche Gallery completes the conceptual process that began with the Qassam missiles of Launching Apparatus presented at the Petach Tikva Museum of Art in 2006.(1) At the height of the Qassam bombardment of Sderot and the towns and settlements around Gaza, Gechtman presented three prototypes of silvery Qassam missiles alongside and on their launchers; one of them lay in a casing which functions as part of the work’s overall array.

The project’s second phase was introduced in the exhibition “Dead-Line” at Kaner House,(2) where the silvery Qassams were joined by rockets painted with various combinations of red-green-black-white based on strict technical specifications outlined by Gechtman. The current exhibition forms the final phase in the Qassam series, featuring the painted missiles and casings intended to store, transport, and preserve them later along the way. This is also the ultimate configuration of the full array, exemplifying the guiding principle underlying the next phase in Gechtman’s life project.

The entire set presented the object of anxiety—”the Qassam”—in three potential “aggregation states” of storage and preparation for launching: lying in the plain wooden casing, standing ready on the launcher, or vertical on its base like a miniaturized monument. The three different configurations duplicate the “real” missile into the sculptural arrangement and the language of art, thereby proposing to neutralize the Qassam’s terrorizing effect which is the main weapon of this rocket, devoid of a warhead.

Presentation of Gechtman’s Qassams—sterile clones of their flying siblings, with their “shells” and launchers—is like announcing the establishment of a sculptural autarchy: “Behold, everything is ready and packed. It may be preserved, it may be launched.” The preservation plea is directed at the institutions of culture—primarily museums—which seem to be the only ones capable of supporting the preservation of Gechtman’s life’s work, both physically and value-wise (i.e., preserving its “value” in the economy of the history of art). At the same time, however, design and production of a durable casing for each work is an a-priori recognition of the possibility that the museum too might fail to do so: “The works are supposed to survive not only the ravages of time, like any work of art, but also the ravages of the place and its cultural deficiencies. The proposed project is thus an attempt to confront an actual adversity, essentially pertaining to the works’ abandonment in a place devoid of real historical and cultural consciousness, under the faulty maintenance prevailing even in the leading art institutions.”(3) As noted by Ninio, artistic recognition does not necessarily yield economic return or a promise for the art work’s preservation for future generations; at least not here, between the Jordan River and the Mediterranean Sea. Hence, Gechtman’s objects also carry their explosive potential, and they might well be launched at the very institutions in whose cellars they wish to be housed.

In the final phase of the planned project—third generation Qassam, if you will—the entire body of objects and installations created by Gechtman will be converted into DIY booklets, technical specifications that will describe in detail how to produce and present each of his works, to be disseminated throughout the world in printed copies and digital files. This conversion is a radical process of dissemination. Ninio maintains that such a process is a radical subversion of the art world’s dynamics of exchange through the concept of the “gift,” and that in return for the open permit to replicate the artist’s works, the “secondary manufacturer” pays with his willingness to function as a “‘carrier’ of ‘Gechtman’ into ‘the future’.”(4) Like stamens carrying the DNA for fertilization in another place and time, Gechtman’s Qassams are the warheads that will guarantee the survival of his work by means of anonymous carriers. Someone, somewhere, will produce the works, and while presenting them in a new context and time, will help push the Gechtmanesque DNA into its next evolutionary phase. In this respect, it is a return to the core concept underlying Gechtman’s work, who has, for nearly forty years, been likening cultural baggage to genetic baggage, indicating the development of a local, peripheral culture through the mutations it performs in “mainstream” culture, precisely as a biological offspring is a mutation of the original DNA of his ancestors. There is no continuity without change.

Artillerymen the world over have a tradition as ancient as the history of military ballistics: inscribing messages for the enemy on the bomb, shell or rocket: “Nasser is waiting for Rabin,” “Kilroy is coming for you,” “Allah is Great.” Writing may be a dangerous vocation sometimes. Gideon Gechtman’s Qassam is ostensibly free of such messages, yet its warhead is a symbolic capsule, a surrogate organ intended to dispatch the totality of his ideas and work into the future.