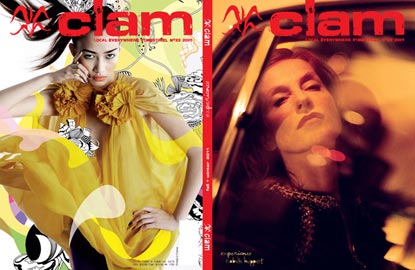 Where were you born? Israel

What do you do? Chelouche Gallery for Contemporary Art Owner and Director

Where do you live? Tel Aviv, Israel

In this issue of Clam we are asking you to share an experience with us. Personally, professionally, inspiring, revolting, funny or just shocking.
Since its opening in 1985, Chelouche Gallery is focusing on an international exhibition program in collaboration with international curators and artists. As part of the gallery main goal to create a dialogue between the Israeli artists and the international art scene, Chelouche gallery runs, since 1996, an international program with the project Passage – International Art Encounters, where artists who share a similar or parallel language, are invited to hold a two-way dialogue, share ideas and hold joint exhibitions in the gallery. The project, which started in cooperation with Dr. Lóránd Hegyi, gives emphasis to the global exhibition space which becomes increasingly cosmopolitan. This is a continuous artistic event which strives to expand the exhibition possibilities.
Among the artists who participated in Passage during the years are Patrick Raynaud and Motti Mizrachi, David Mach and Zadok Ben-David, Gideon Gechtman, Bertrand Lavier and Haim Steinbach, Pedro Cabrita Reis and Gal Weinstein, Jaume Plensa and Nir Alon and others.
One of the artistic collaborations that were inscribed in my memory was the joint exhibition of the Italian artist Michelangelo Pistoletto and the Israeli artist Micha Ullman (1999). In that show an interesting encounter was created between two international artists of the same generation, who combined local cultures with universal values. In the exhibition everything turned to be a part of everything, Ullman’s works were reflected in those of Pistoletto, and the spectator, being reflected in everything, became himself a walking “sculpture” in the gallery. Both artists shared the emotional and spiritual, as well as the physical and sensual experience.

What lessons did you learn from this experience and did it change anything for you?
There was a great experience of generosity, accessibility, mutual openness, and reciprocal learning in the working process towards this exhibition. The cultural artistic encounter opened new ways of thinking and the whole project of Passage became one of the central pillars of Chelouche Gallery’s activity. Nowadays, when we’re facing the major transition towards the inauguration of Chelouche Gallery’s new venue in Tel Aviv, where the gallery will expand upon four floors, and will hold numerous exhibition possibilities, the focus on creating international artistic dialogues is one of the pivots of the gallery’s vision.

How did you get the first experience for what you’re doing now?
In 1989 I was the curator of the exhibition “Line against Line” at Karmeliterkloster Museum, Frankfurt. I traveled to Germany with a group of 9 young Israeli artists that reflected a significant and unique cross-section of the rising generation in Israeli art at that time. A year after this exhibition, I invited A.R. Penk and his group, leading and prominent East-German artists, to exhibit at Chelouche Gallery. These international collaborations led to the gallery extensive international activity; in which non-Israeli artists were invited to create site-specific projects in Tel Aviv like William Kentridge, Orlan, Txomin Badiola, Carmela Garica, Melanie Manchot, Volker März and others, while parallelly, the gallery initiated world-wide exhibitions for Israeli artists. With a high volume presence in the international art scene the gallery has worked throughout the years with many significant curators on numerous projects, both in Israel and abroad and participated in many international art fairs, such as Art Basel, Art Forum Berlin, Arco Madrid, FIAC Paris and more. This gradual process that Chelouche Gallery led changed the Israeli art world completely, and opened the international gates for Israeli art.

Generally what have life experiences taught you?
One should always keep his eyes open and never lose passion, curiosity and generosity towards life.

Finally, books or experiences, which one should be priority?
Definitely experiences. Although books can widen one’s horizons of thinking, experiences allow you to expand your boundaries and actually reach those horizons.