16.12.2010
Gallery
Chelouche Gallery
Gaston Zvi Ickowicz’s current body of work is a product of observation of the surface, like a “regional survey,” a preliminary archaeological study intended to provide a sampling of the remains in the studied site.
Read more >
Visit Artist Page > 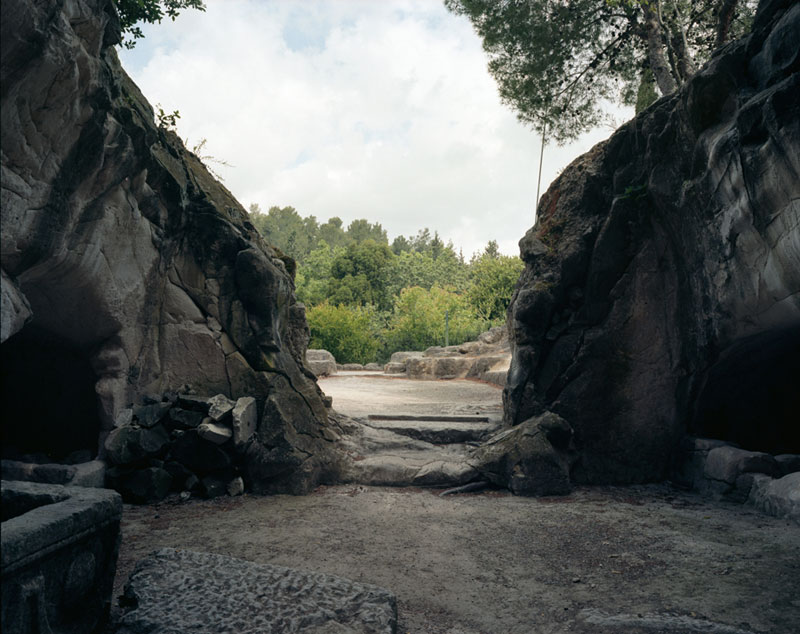 Gaston Zvi Ickowicz’s current body of work is a product of observation of the surface, like a “regional survey,” a preliminary archaeological study intended to provide a sampling of the remains in the studied site. Such a work method looks like the beginning of a calculated, systematic process of searching finds, the traces of past occurrences, which will help him weave a chain of signifiers that lead to the emergence of differentiated meaning. He arrives in places where one may identify signs of culture and history, thereby addressing questions of belonging and detachment.

Ickowicz continues a process which began in his previous series, “DRY,” expanding his scope of observation. He photographs caves, archeological sites, the remnants of extinguished bonfires, etc. concurrently. The multiplicity of themes and the concentration on photographic objects, such as traces, remnants, and vestiges, convey the sense of a quest of self-searching for belonging and roots.

This quest begins with an unexpected encounter. During a stay in London, Ickowicz and his camera come across a stuffed bird in a museum. It was precisely this encounter, in the single photograph in the exhibition taken outside Israel, in a place where Ickowicz does not seek roots, that an exceptional moment takes place, one which has not yet entered a symbolical system, forming the exhibition’s “zero point.” The place which is ostensibly the only one devoid of roots, is the very place where Ickowicz encounters a contradiction-ridden present which blurs the boundary between past and present, between life and death. This encounter goes beyond language, a detachment from the differentiated reality. Only through the systematic process of entering language and a chain of quotations from collective history can Ickowicz begin to take a position within the social order, and construct a meaningful narrative and an identity with defined characteristics.

Time and again, however, he stumbles upon the authentic urge to shift the gaze from the familiar places and the paved roads, and his camera is lured by signs on the roadside, by occurrences off the beaten path. At the height of the journey he glides into caves adjacent to the National Parks where he visits, encounters checkpoints in Judea and Samaria, as well as Arab villages which remain far removed and inaccessible to him. The result is that the vestiges and remains caught in his camera do not consolidate into a single, clear and coherent narrative; rather, they form a sequence of unique encounters which generate a complex story rife with contradictions. These encounters feature stories which sometimes compete, sometimes—support each other.

The title of the exhibition, “Cubit, Span, Foot,” alludes to the tension between the choice of objects and a work process, which is scientific, systematic, and objective (the use of the standard of units of measure and the turn to the past, to a measuring method prevalent in antiquity, known as a biblical system of measuring), on the one hand, and the fact that the units of measure were drawn from body parts, whose use in the past was not uniform, and changed from place to place, from society to society, and sometimes even from person to person, on the other.

Gaston Zvi Ickowicz, born 1974 in Buenos Aires, immigrated to Israel with his family in 1980. Graduate of the Bezalel Academy MFA program, winner of 2008 Gerard Levi Award for a Young Photographer on behalf of the Israel Museum, Jerusalem and the scholarship from the America-Israel Cultural Foundation for 2008. He had exhibited in numerous exhibitions in Israel among them att Tel Aviv Museum of Art, Israel Museum in Jerusalem and Haifa Museum of Art, and galleries in Europe and the US. In 2010 Gaston Zvi Ickowicz has received the “Young Artist Award” from the Israeli Ministry of Culture. On October 2011, a solo exhibition of Ickowicz’ works is scheduled at Tel Aviv Museum of Art.