12.03.2016
External
Chelouche Gallery
Curator: Netta Haber
The exhibition “Ministry of Information” is the result of the long and continuous work of the artist Tomer Sapir in the museum and educational space Beit Hankin.
Read more >
Visit Artist Page > 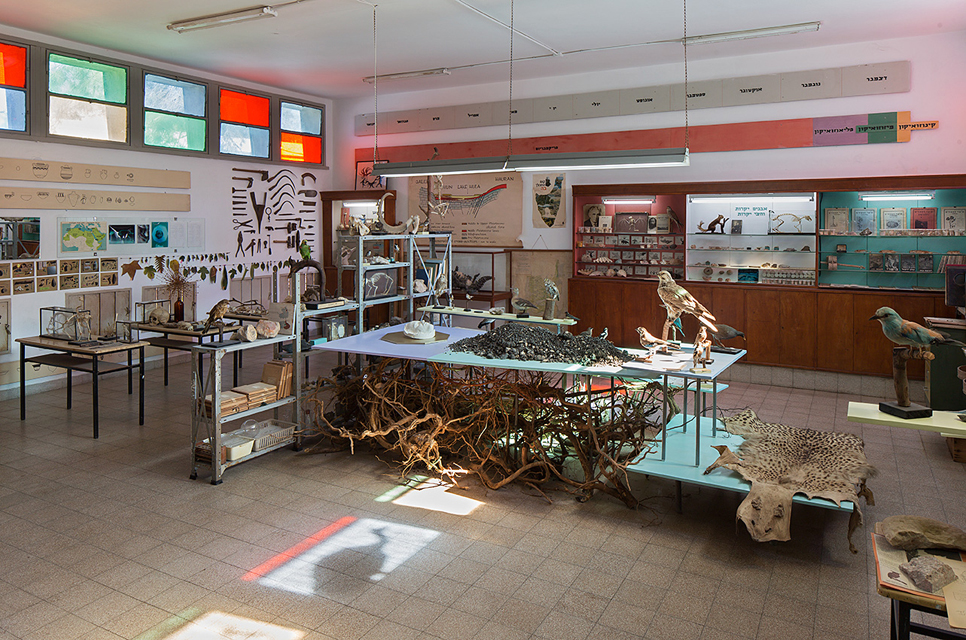 The exhibition “Ministry of Information” is the result of the long and continuous work of the artist Tomer Sapir in the museum and educational space Beit Hankin. In parallel with the preservation and developmental activities that started there recently, Sapir was invited to present an art exhibition in the space that was converted to a gallery for contemporary art. The work process was accompanied by a sense of uncertainty while the place turned from a neglected space to a renewed one, a process that permeated both the way and the body of Sapir's work.

For Sapir this was an opportunity to work in a complex and layered space, with a unique architecture and varied collections. A place that was frozen in time, reflecting cultural treasures of distant times, and at the same time, inviting and enabling its reexamination from a contemporary point of view.

The exhibition developed and grew out of a year's work, during which Sapir made his way from Tel Aviv, back and forth, and did a kind of personal, informal research, exploring the evolution of the place. During his visits he probed and studied Beit Hankin, its unique collections, and its natural and human habitat. He got acquainted with the school, the staff and the pupils, and the essence of the place. For a while Beit Hankin became his private studio.

Sapir had the fortunate opportunity to work with such an extensive and varied museum collection for the first time. Like a curator, he investigated, collected, collated, sorted, selected and re-selected what to display, and how. In this way he served as a kind of gatekeeper, conscious of the political and ideological significance of his actions. The disarray at Beit Hankin at the time allowed him extensive field of action. The installation was built and developed in a slow and continuous process, and grew organically out of the place and its collections.

At the base of the exhibition “Ministry of Information” stands the collection as an artistic strategy. The exhibition was built largely from a given reservoir of objects, a multidisciplinary inventory – a treasure trove for the artist – including different and varied natural and manmade objects: dozens of mounted animals and skeletons, a rich geological collection, a collection of dried plants (weeds), antiques, personal belongings of Yehoshua Hankin, books, teaching materials, maps, charts, and many photos. Sapir delved into the innards of the museum, opened every drawer, and uncovered objects that remained hidden from the public for many years.

Beyond the use of Beit Hankin's inventory, Sapir collected various objects from the surroundings (agricultural machinery parts, rusty tools, old Tnuva boxes, test tubes, a barrel of fertilizer, thistles, etc.). In addition, he combined artwork of his own in the exhibition, like an upside down dinosaur's sculpture in a display-cabinet, his death-mask made of plaster, a video art documenting the artist and his children releasing the death mask from its mold, neon-piece, and röntgen-like stills.

The concept of the place, defined back in the day by Menachem Zaharoni, the founder of Beit Hankin, was based on the practice of collective gathering which instilled a sense of mutual responsibility and involvement of the individual in the community. In a similar vein, Sapir invited the school pupils and members of the local community to look around their surroundings, collect objects, take pictures and create collages based on botanical and zoological drawings from Zaharoni's library. Some have been incorporated into the exhibition, and some have been documented by the artist and are displayed as photographs. In addition, families living in the village were invited to collect about 8 objects which were arranged by Sapir on colored surfaces, photographed, printed and placed in a large grid in the village's community center, as an extension of the exhibition at Beit Hankin.

In its previous incarnations Beit Hankin functioned as a kind of information center that created clear and unequivocal narratives. As an educational center located in a school, it distributed and mediated knowledge, and was an active partner in the creation of the cultural heritage and the collective historical memory. Sapir’s approach is distinctly different. He unravels and re-positions the components into a multi-centered installation, offering different perspectives. The exhibition “Ministry of Information” lacks a uniform tendency, opposes a one-dimensional mediation, poses contradictions and questions, and yields a variety of interpretations. An intricate and loaded grid, a multi-layered and overlapping display reveal and conceal simultaneously.

Similarly to an archeological site, the continuum is consistently exposed and obstructed, which makes it difficult to decipher. Sapir’s dense installation blurs any distinction between disciplines or common hierarchies like between science and art, natural and artificial, beautiful and ugly, desire or loathing, reality and fiction. On the surface, Sapir’s approach seems perfectly innocent. However, by re-positioning the geological items, the skeletons, the mounted animals, the maps, the teaching materials, and the rest of the collection, the collective memory disintegrates and charged societal, educational, and political issues appear.

Upon entering the gallery, the visitor encounters the back of an old wardrobe, covered with maps and old posters, blocking the view of the installation. The entrance is decorated with a garland and colorful flags taken from an “Eretz ” peripheral culture. A festive atmosphere without a theme or reason instantly turns into a morbid spectacle loaded with objects and surprises. Without a pre-set course, walking up and down in a spiral movement, each step, each turn of view reveals more and more details, and the picture becomes increasingly complex. An afternoon lightning emanates from the paneled windows covered with colored transparencies, like a kind of “poor man's vitrage”, reinforcing the sense of in-between, undefined time, like an eternal twilight. At first glance a familiar feeling rises for a moment, as if you entered into the good old nature museum with its organized body of knowledge.

Sapir acts in contradiction to conventional scientific and museum practices. He takes items out of context or definition, places them as anonymous objects, without information, unrelated, and without mediation or hierarchy. As such, he creates a fictitious, absurd, false, unraveled information center. Sapir disrupts the medial approach, the connection between the object and the word, is not committed to its literal meaning, and plants “bugs” disrupting the continuum of the installation.

Notwithstanding, familiar museum practices like sortation and hierarchy come up in the exhibition when Sapir displays the school children’s work arranged according to age and technique, or when he centers groups of objects according to sort, category, or type (rusty work-tools displayed one by the other, for example). In this way, a tension between the unraveling, the lack of hierarchy and meaning, and the instinctive wish of the visitor to decipher the meaning of the installation and to discover its hidden connections, is created. Ironically, the lack of a catalogue and context per se strengthens the search for those.

As a person who testifies of himself that dealing with death was present in his life from an early age, the artist entertains deep and open relations with mortality. Among the mounted animals – that look like animals that underwent an unsuccessful attempt at resuscitation – the many skeletons, the fossils, the dry thistles, and the forged dinosaur corpse, Sapir creates an undefined time-space, an intermediate level between life and death. The artist’s death-mask is placed at the center of the exhibition, his body a mound of soil taken from the heaps of earth used to build the renewed train tracks of the . Roots of the communal orchard that was uprooted in Kfar Yehoshua at the time are placed on the floor, as a preparation for the artist burning himself at the stake. This installation corresponds with Yehoshua Hankin’s memorial that is located in the nearby room and includes, among other items, his death-mask. A neon-piece on one of the gallery’s walls saying “transport to foreign burial site”[1] links the components of the exhibition to a blocked link that resolves around extinction and failure. The strength of the exhibition increases in light of the understanding that Sapir’s intricate mausoleum poses a distinct feeling of loneliness and estrangement, as well as a sense of cultural and social failure.

[1] A sentence found on a sign in one of the museum’s drawers. Its meaning is unclear