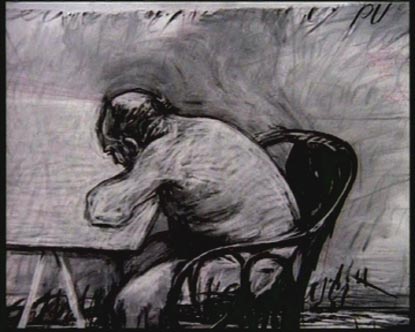 POINT OF VIEW: AN ANTHOLOGY OF THE MOVING IMAGE

Francis Alys, El Gringo (2003)
Born 1959, Antwerpen, Belgium. Lives and works in Mexico.
Running time: 4 minutes 12 seconds
In El Gringo, viewers experience the discomfort of being an outsider when the camera is confronted by a pack of snarling dogs.
Interview held by Hans Ulrich Obrist.

Gary Hill, Blind Spot (2003)
Born 1951, Santa Monica, California, USA. Lives and works in Seattle, Washington.
Running time: 12 minutes 27 seconds
A brief encounter in the street with a man in a southern French city that has a large North African population is slowed down, forcing the viewer into an intimate relationship with the subject and the shifting emotions in his face.
Interview held by Hans Ulrich Obrist.

Pipilotti Rist, I Want to See How You See (2003)
Born 1962, Rheintal, Switzerland. Lives and Works in Switzerland.
Running time: 4 minutes 48 seconds
Rist explores the macrocosm of humanity in a video, art and music collaboration. A lyrical tale of a witch’s coven is played over images of a person where each body part symbolically represents an area of the world.
Interview held by Hans Ulrich Obrist.

Anri Sala, Time After Time (2003)
Born 1974, Tirana, Albania. Lives and works in Paris.
Running time: 5 minutes 22 seconds
The details in Sala’s oblique and barely moving frame stimulates the viewers’ s visual and auditory capacity by forcing them to concentrate on a single puzzling image until
its essence is revealed in an unexpected flash of light.
Interview held by Hans Ulrich Obrist.