What’s Going On In The Field Now 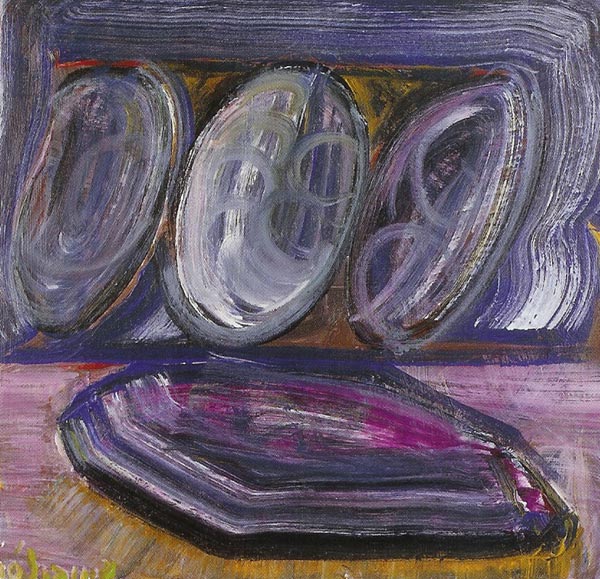 “If it isn’t realistic or descriptive, let it at least convey a feeling”

Pinchas Zinovich’s abstract painting is born of oppositions: between idiom and motifs; between abstract expression and the wish to employ common visual or verbal codes. The special place he occupies in Israeli art is the result of these oppositions. Zinovich proposes an ambivalent painterly position, hovering between the abstract and the non-abstract. He does not follow in the footsteps of the New Horizons group or of traditional, figurative, narrative art. He is characterized by very expressive painting, which is not based on concrete imagery but on color and on presenting the creative process.

The tension between the two poles is obvious in the titles that Zinovich gives his works. He does not settle for the indistinct Untitled, selecting titles that complete what the eye sees but does not know how to interpret. Cases in point are the oil works Laughter Landscape, Egglike Sunset and The Sorrow in Balance. The same idea applies to his present series of works, What’s Going on in the Field Now, concluding eight years of work in acrylic, which started after his big one-person show at the Tel Aviv Museum of Art in 1993. The series, 32 works in five different formats, represents Zinovich’s mature work, placing him in the pantheon of Israeli art as an artist of pure painting.

The ‘field’ in the series’ title has several meanings: the public territory – field in the geo-political sense; the private field – the artist’s territory, the studio where the works are created; and the wider field of art.
Zinovich is an abstract painter, whose paintings are not a direct sequel to canonical Israeli abstract. Although he has worked for a while in close physical proximity to Yosef Zaritsky’s studio, Zinovich was never invited to his studio. “Despite the biographical fact that placed Zinovich and Zaritsky across the same path in Kibbutz Zova, it is difficult to draw a direct line linking their paintings, certainly not in his more mature stages.”2 While Zaritsky painted the landscape surrounding him, Zinovich focuses on his internal landscape. The typography he outlines indicates the artist’s soul, the world he has experienced and internalized. Zinovich habitually listens to the radio as he works, mainly to talk programs or, if you will, “talk from the field”. His point of departure is not the Zova landscape but monotonous and depressing radio talk. He creates spontaneously, and the lack of analytical processes charges his work with a heavy psychic load. Zinovich is related, stylistically and thematically, to Abstract Expressionism.

Zinovich’s work process, entailing personal aspects that burst forth in an abstract idiom, are reminiscent of Moshe Kupferman’s complex work. The similarity between these two artists is apparent in the works’ multiple layers, in the many stripes, in the use of typical colors and in the personal experiences the works express. Kupferman, however, expresses himself with a whisper, his words hidden under murky layers of paint, whilst Zinovich’s communication is conveyed with a scream. In his work, there are practically no spaces between the spots and forms; there is an overflow, filling the eye and deafening the ear.

Revealing and concealing are Kupferman’s typical practices – stripes, erasures, layers covering each other, concealing what lies beneath them. These practices are also evident in Zinovich’s work, conveying, however, a very different attitude. He too works in layers: adds, erases, paints on another layer, constantly reorganizing the work. Kupferman’s quiet, analytical, dimly colored Abstract is turned by Zinovich into a screaming, non-rationalistic work in glowing acrylic colors.
To the many layers of paint he also adds forms. “These ovals always appear,” he says. And although they are abstract, “these works contain much that is personal. I am always returning to my war injury. The works are strong, but they’re not happy or lively. They are a scream from the gut, a bodily secretion, as it were”. This secretion of the body and the soul dictates a specific work process, resulting in an artistic expression with an audible quality. The colorfulness, the powerful brush strokes, the meetings between color fields (which are harmonious at times but often impossible), the struggle between the forms, the blinding plethora – all give the works a vocal quality. The works scream themselves to death. This scream is related to Zinovich’s “crude difficulty”.3 Though his crudeness may remind us of a child who screams when unable to explain himself, it stems from a conscious use of artistic means.
Difficulty is an important factor in Zinovich’s practice. Both in the stubborness they relay – the unending repetition, the layers of paint, the concealment, the attempt at creating form, at delimiting a field – and in the works’ birth through constant internal struggle.

The two basic elements in Zinovich’s work are form and color. The colors are rich, from dim to blindingly bright. Coquettish at times, clashing at times, they are always powerful. The forms are in opposition to the confident use of paint; raw, primal and uncertain, unfinished, they are constantly searching for a nonexistent whole. His paintings reject wholeness.

Zinovich’s entire work – stripes, lines, brushstrokes and colors – produces a feeling of a physical and psychic ordeal. His idiom is characterized by discord and by an inability to achieve harmony. There is a dissonance between the short, rounded lines, closed up in themselves, and the long brushstrokes that merge, cover each other and delimit the work; between the will to erupt and open up and an introverted gathering in. These oppositions are clearly the result of the artist’s deep commitment to the creative process, which is dictated by emotions.

From the spectators’ point of view, Zinovich’s works cause unrest, they are nearly impossible. The artist’s difficulties in the creative process convey themselves to the viewers, demanding much of them. The dominant color in the works is red. It is not a happy red, but the red of meat, of flesh, of blood. The paintings powerfully suggest a live organism: limbs and organs, organic pieces, viscera (see works nos. 2, 4 and especially 14). The sense of corporeality is conveyed by many of the works, intensifying the discomfort.

Tali Tamir noted Zinovich’s affinity to German Expressionist paintings of the 1980s, to Gerhard Richter and Georg Baselitz.4 I would like to go further back. In 1968, when he was a Bezalel student, Zinovich saw a Chaim Soutine exhibition at the Israel Museum. He said to himself that if he were to become a painter, he wanted to paint like Soutine. Painting no. 17 in the present series might be seen as Zinovich’s response to Soutine. Against a black background there are remnants of what may appear to be a figure. The drippings of red paint imply blood flowing from a body. Although it is an abstract painting, we watch what appears to be a corpulent figure, reminiscent of Soutine’s bodies/blocks of meat and of Francis Bacon’s Pope portraits. The reference to Soutine and Bacon places Zinovich in a long tradition of Expressionist painting, sensory and sensuous, in which the body is present as an image or a metaphor.
In the 1980s Zinovich stopped working in etchings – the art of colorless line – and turned to abstract painting. After years of “want of matter” in Israeli art, many artists returned to painting in general and specifically to Expressionism. Prominent among them was Moshe Gershuni, whose expressive paintings in the 1980s expressed a personal crisis in a gush of feelings, employing a palette of secretions (yellows, reds) alongside a salient use of words. Although his artistic position is far from Zinovich’s, the similarities between them are apparent in the depth of experience they communicate, in the fact that the whole body takes part in the creative process, in their commitment to the “heaving of the soul”. In Gershuni’s work we easily recognize images; in Zinovich’s work we find only their residues. The words written by Gershuni on the paper itself turn into titles in Zinovich’s work. The corporeality of the colors, the presence of the body, the genitalia – these exist in Zinovich’s work as an interpretive option.

Zinovich’s expressive attitude, so different from that of Lyrical Abstract, creates works that are beautiful yet hard to digest – disharmonious, raw and corporeal, expressing angst. The option that Zinovich presents to his spectators is not pleasant, but demanding.

Zinovich presents an abstract that does not stem from the intellect, but rather sanctifies the creative impulse; that is not supposed to please the eye, but rather free the soul. The position he represents in Israeli art emphasizes bodily presentation, weight and the work process. Unlike Lyrical Abstract, characterized by airy watercolors, Zinovich presents his own body and the work process through his brush strokes and many layers. It is a presentation of an internal struggle, almost physically expressed in the works, which carry an artistic charge of colors and forms and the thematic burden of a tormented, storming soul. The final effect is of heaviness, precluding any possibility of pure beauty.

Painting no. 22 may serve as an example. In it, there is a powerful occurrence of multicolored lines, delimiting forms. In the center we find a typical womb-like form, containing rounded forms in almost cheerful colors. It is not, however, a lively, pleasant work, but a disturbing one. Julia Kristeva wrote of the black sun image as a metaphor for melancholy.5 This metaphor is to be found in many of Zinovich’s works, whether overtly or covertly. In this painting its presence is plainly exposed. From the topmost part of the picture a black spot emerges, a black sun that illuminates the whole work with a black light. The black sun is delineated in azure. This is the ambivalence characteristic of Zinovich: the apparent joy, born of the gay bursting lines and colorfulness, is overshadowed by latent melancholia, stemming from the artist’s private situation, his restricted living space, his interior landscape. In Zinovich’s work external and internal distress acquires its abstract expression.

Despite the affinity of Zinovich’s work to German Expressionism, the title of the present series – ‘What’s Going on in the Field Now’ – refers to Israeli art. The words ‘What’s going on’ are part of the title to Arie Aroch’s work, ‘What’s Going On What’s Going On at Home How are the People How are they Living’, also painted against a blood-red background. “What’s Going On” is also the question that Gershuni asks his bleeding soldiers in the 1980s. Thus, a little motif is established in Israeli art. One that is not based upon a concrete visual image, but on a very Israeli figure of speech, linking Arie Aroch of the 1960s to Gershuni of the 1980s and to Zinovich of the new millenium.

Text from the Catalog of the exhibition