10.03.2012
Gallery
Chelouche Gallery
Curator: Nira Itzhaki
The works included in the exhibition “ZANGA ZANGA” share parallel themes – representations of moments of collapse, ghosts, hybridity, repetition, and transitions between languages – while reenacting iconic political events, some of which occurred in the Arab world this past year.
Read more >
Visit Artist Page > 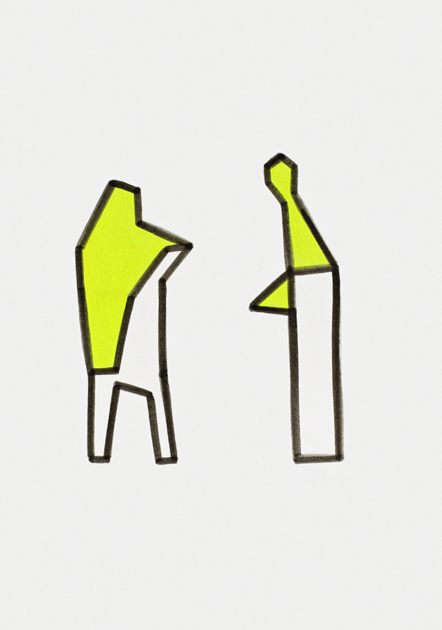 The works included in the exhibition “ZANGA ZANGA” share parallel themes – representations of moments of collapse, ghosts, hybridity, repetition, and transitions between languages – while reenacting iconic political events, some of which occurred in the Arab world this past year.

The exhibition features the following projects:

1. Contribute a Better Translation, 2011
“Google Translate” calls on its users to improve its translation by clicking on the link “Contribute a Better Translation.” In this video, there is a succession of tens of political slogans taken from the repertoire of Palestinian resistance ranging from the left to the right and from the Balfour Declaration until today. At the center of this work lies the problematic heart of translation: the shift from one language to another across time, space, and visual patterns.

Contribute a Better Translation No. 2, Zanga Zanga: This work is composed of two small canvases that exhibit a visual onomatopoeia. The linguistic structure, Zanga Zanga is a quote from the televised speech of the former Libyan leader, Muammar al-Qaddafi, when on 22 February 2011, he threatened to track down all who opposed him to the very last alley. Waked exhibits the expression through the use of “Google Translate” in the Chinese language, the logographic letters of which contradict the metaphoric iteration, which Arabic and Hebrew speakers share in the face of the incomprehensible. (“It’s all Chinese to me”).

Contribute a Better Translation No.3 is a series of works on paper that imagines Palestine as if it is Pal‘stini‘ (Palestine in Yiddish). In the Palestine National Council’s nineteenth conference, which took place in Algeria on 15 November 1988, Yasser Arafat declared an independent Palestinian state. Waked inserted the text of this declaration, written by Mahmoud Darwish, in “Google Translate” and transformed it from Arabic to Yiddish, a language that has lost its political power to establish a state. He then visually “translated” it into a scorched text.

2. Beace Brocess, 2010
12 July 2000. Ehud Barak in the role of Israel and Yasser Arafat in the role of the Palestine Liberation Organization meet under the patronage of Bill Clinton in the role of the United States at Camp David to promote the “peace process.” The video Beace Brocess No. 1 duplicates and reconstructs into infinity the mutual dance of acknowledgment between Barak and Arafat. Setting aside their pride, they tussle in a performance of respect over who would be the first to enter the negotiating room. The
work’s name “Beace Brocess” is not just a consequence of Arabic diction (the Arabic has no “p”); it demonstrates the threshold of translation and the ability to pretend.

3. You Are My Life, 2011
The name of the work is taken from a song of the well-known oeuvre of Umm Kulthum: Inta ‘Umri (You Are My Life) in a 1964 performance. The work isolates the mandil (kerchief) that the singer holds in her right hand, transforming it into a floating image.

5. Paradise Square, 2011
In April 2003, two weeks after the British and American invasion of Iraq, the statue of Saddam Hussein, which was in Sahat al-Fardaws (Paradise Square) was brought down. The video Paradise Square No.1 and the series of drawings in black ink Paradise Square No.2 isolate this moment of toppling, refining the movement of collapse into a metamorphosis of a black shadow.

6. To Be Continued…, 2009
This video contains the longest chronological time unit in the exhibition (41:33) and provides a reflection on the gap between chronological and narratological time achieved by loop screening. The poetics and the conception of the suicide martyr video genre are draped here over a written text, The Thousand and One Nights. According to what is told, King Shahrayar commands the killing of his wife after he learns that she was not faithful to him, and he asks his assistants to find him a new bride every night. Every morning, after spending the night with his new bride, he executes her as well. A young woman by the name of Shahrazade rescues herself from this destiny by spinning together narrative threads of different genres – history, poetry, erotica, and legends that fascinate the king who consumes more and more of them, and in so doing postpones the awful decree. There is no end to the story
and hence, the suspension of the narratological end postpones the personal end. Like Shahrayar, the character of the suicide bomber in Waked’s video postpones launching his mission through an infinite story and the infinity of the story.

7. Away From You, 2011
The song Ba‘id ‘Anak (Away From You) was first performed in 1965. The work focuses on the stamping of Umm Khulthum’s left foot just underneath a dress that scrapes her heal.

8. Visit Palestine, 2011
A series of prints present graphic adaptations created by the combination of a press photo of the “the reactor” and a photograph of the Dome of the Rock. The name of the work is taken from the well-known poster of the Zionist graphic designer, Frantz Krauss printed in 1936 as a production of “The Tourist Association of Palestine.” This visual and literal combination links the dome of that concealed “textile factory” in Dimona (according to international sources) and the dome of the late seventh century Jerusalemite building, which appears at the heart of the Krauss’ poster, and has with
time become a synechdoche of Palestine as a whole.