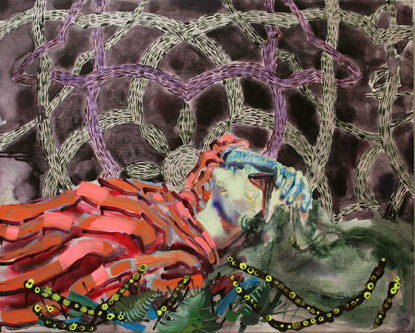 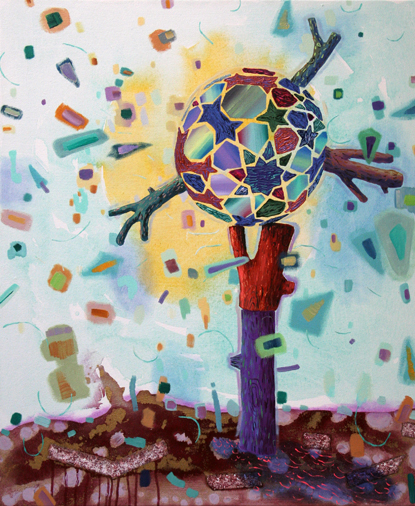 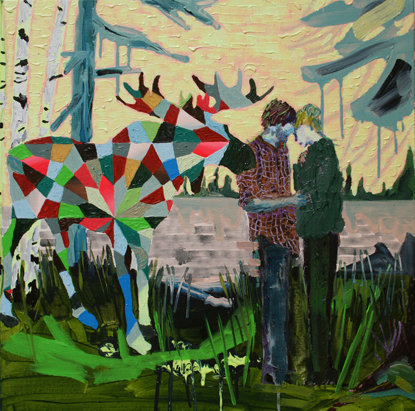 Shulamit Gallery, Los Angeles is pleased to present Piecemaker, a solo exhibition of new paintings by Canadian-born artist Melanie Daniel. Drawing from her experiences living in Israel for the past twenty years – seven of which she has spent in the mixed Arab-Jewish city of Jaffa – Piecemaker is a striking body of work that reflects Daniel’s negotiation of her own hybrid identity and moments of cultural dislocation. This selection of paintings presents dichotomous motifs, sublime color palettes, abstracted landscapes and dreamlike settings that confound concrete storylines. Unique formal and compositional elements unite to create a sense of unease that is rooted in the artist’s personal experiences living in her adopted home.

In her practice, Daniel excels at defying traditional narrative frameworks, achieved through the use of dense and disorienting compositions, the melding of abstraction and figuration, and by deploying jarring color combinations activated through thin color fields and areas of detailed brushwork. In Piecemaker, the story is always unresolved, as Daniel prefers to create psychologically fraught scenes that evoke both reverie and anomie. This tension between memory and fantasy highlights her own personal negotiation of Jaffa’s diverse backdrop, where local Arab and Jewish cultures co-exist to create a vibrant, complex, and at times, fraught sociopolitical environment.

Throughout the exhibition, Daniel continues to incorporate conflicting cultural motifs, referencing Canadian landscape painting embedded with traditional Arabic designs. While these themes co-exist side-by-side, they are never fused and always irreconcilable. In Nargila (2014), a hookah, or smoking pipe used throughout the Middle East, sits atop a tree trunk, as if it is a mere outgrowth of the natural environment. Yet this juxtaposition is strange and asynchronous, a merging of two very separate worlds that Daniel inhabits on existential and psychological levels. As she states, her current home has had a tremendous impact on her life and artistic practice, something she has only come to terms with in the past year. In The Drifting Patch Tree (2015), a young woman stands on a patchwork landscape grasping upward toward an uprooted tree that floats away beyond her reach. This solitary figure is concealed within the larger composition; she is rendered in the same violet hues as the background, her clothing mimicking the vibrant swaths of geometric patterns that rise above her. The notion of camouflage denotes a blending in or integration, but also implies a masquerade or disguise. Daniel’s stylistic choices echo the strange experience of assimilation into a complex society – in this case, the struggle between cultural preservation and shifting one’s identity in order to belong.

Unexpectedly, the exhibition’s title Piecemaker (a homophonic pun given the geopolitical context where Daniel works) specifically refers to the name of American quilt-making guilds – an interesting connotation given the way the artist “stitches” and lays together disparate symbolic forms. The idea came to Daniel as she painted an Arabesque star, which for her recalled North American-style quilts more than a motif from Islamic cultures. A sudden reminder of her own Canadian roots, Piecemaker reflects the sense of liminality and apartness that many immigrants may feel when negotiating a new homeland. While the content of this series reflects Daniel’s deeply personal experiences as a Canadian living in Jaffa, the universal aspects of her work are revealed through the viewer’s own introspection and Daniel’s deft handling of composition, color and perspective. By creating hallucinatory storylines just beyond reach, she creates a sense of displacement that is both strange and recognizable, leaving room for the viewer to create their own parallels and associations. By subverting the narrative impulse of figuration and undermining familiar tropes of landscape painting, Daniel makes work that she describes as “anti-nostalgic” – they begin as highly subjective meditations that transform into unsentimental, imaginative worlds that come alive at the edges of our perception.

Born in British Columbia, Canada, Melanie Daniel has lived and worked in Israel since 1995. She received a BFA and MFA at the Bezalel Academy of Art & Design, Israel, where she also taught painting for several years. Daniel has had numerous exhibitions in Israel and abroad, including solo shows at the Tel Aviv Museum of Art; Chelouche Gallery, Tel Aviv; Noga Gallery of Contemporary Art, Tel Aviv; Asya Geisberg Gallery, New York and Kelowna Art Gallery, British Columbia, among others. Her work is included in the collections of the Tel Aviv Museum of Art, Harvard Business School, and the Brandes Collection. Daniel’s work has been featured in publications such as Newsweek, Frieze, Haaretz, CBC/Radio Canada, The Huffington Post, Beautiful Decay, and the Artists Magazine and she has received grants from the Pollock-Krasner Foundation, New York Foundation for the Arts, and Creative Capital. In 2009, Daniel was awarded the prestigious Rappaport Prize for Young Israeli Painter and in 2012, attended the NARS Foundation Residency in New York City.

Shulamit Gallery began as a roving exhibition platform in 2006 and opened its flagship location in October 2012 in Venice Beach, California. The gallery’s mission is to broaden cross-cultural awareness and understanding through contemporary art. By producing high-caliber exhibitions and public programming, the Shulamit Gallery aims to foster dialogue through artwork that is aesthetically innovative and socially-engaged. Devoted to building bridges between regional and global communities, the gallery works primarily with artists from the Middle East from diverse ethnic and religious backgrounds.

Works by Gideon Gechtman, Ira Eduardovna and Uri Gershuni were purchased for the Israeli art collection of the Tel Aviv Museum of Art, 2022

Tom Pnini: ‘Ballade to the Double’ | Solo Exhibition at the Israel Museum 2022