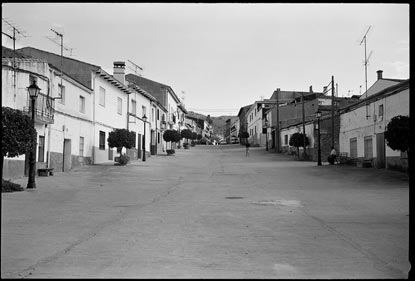 In 1950 the American photographer W. Eugene Smith published a visual reportage in the famous Life magazine. The series, which in time was titled “A Spanish Village”, was shot in the Extremaduran village of Deleitosa. This work defined the “photo essay” genre and even more recorded an indelible image of life in Franco’s backward, rural Spain. In 2007, the Israeli photo essayist Miki Kratsman travelled to Deleitosa in search of W. Eugene Smith. What he found there was rather disturbing: a modern town with asphalt streets but without the inhabitants that had given life to Smith’s images.

Miki Kratsman, Israel’s highly distinguished photographer, has, for over 22 years, been infinitely committed to seriously documenting the evolution of the Israeli-Palestinian conflict. From Kratsman’s point of view, an accumulated documentation of the daily routine is more important, significant and even disquieting than any specific documentation of a potentially spectacular or extreme event. Kratsman was born in 1959, Argentina and immigrated to Israel in 1971. His photographs appear regularly in “Ha’aretz” newspaper in the column “The Twilight Zone” on which he is signed together with the journalist Gideon Levi. Since 2006 he presides as head of the photography department of Bezalel academy of arts, Jerusalem.