Chelouche Gallery is delighted to announce that Miki Kratsman has been selected as the fifth recipient of the prestige Robert Gardner Fellowship in Photography of the Peabody Museum of Archaeology and Ethnography at Harvard University. 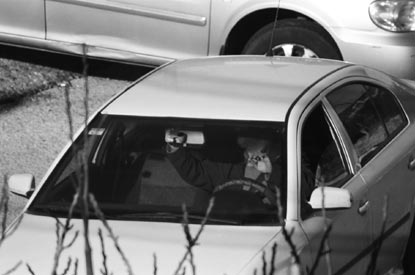 Among the group of talented photographers nominated by the Peabody Museum group of practitioners, curators, and academics, the Fellowship’s selection committee decided that Kratsman’s proposal had the best potential for meeting the Fellowship goals. They described Kratsman’s work as a “daring, creative, important,” and “totally unsentimental.”

Since 1986, Kratsman has covered the occupied territories as a photographer for several newspapers, mostly for the Schoken Group, publishers of Ha’aretz newspaper. Over the years, he has photographed Palestinians at demonstrations, daily activities, celebrations, funerals, for profile story portraits, and more.
During his Fellowship, Kratsman will create a portfolio of photographs that explore how Palestinians appear to the eye of the beholder, whether that person is a passerby, a newspaper reader, or an Israeli soldier. In one group, Kratsman will present Palestinians as targets, shot with a lens used by Israeli Defense Forces (IDF) unmanned aerial vehicles. In another group, Kratsman will isolate images of those identified as shahids or martyrs as portrayed on neighborhood posters or placards. A third group takes inspiration from Francois Aubert’s photograph of the shirt of Maximilian, ruler of Mexico, just after his execution in 1867; each of these will feature the last piece of clothing worn by a Palestinian before he was killed. The final group builds on Kratsman’s discovery that many of the Palestinians he’s photographed over the decades have been killed; in a field study, he will ask Palestinians to mark his photos to indicate who is “wanted,” a victim, or a shahid, and these marked photos will complete the portfolio.

“Kratsman’s photographs are unique,” says visual culture writer Ariella Azoulay. His “decisions are torn between the professional duty to photograph in any circumstance and the civil duty to not let his gaze obediently follow the agendas of media and political discourse. He always reminds the spectator that the occupation of Palestinian Territories is the background story for all events taking place there.”

Prof. William L. Fash, William and Muriel Seabury Howells Director of the Peabody Museum, noted, “The recent tragedies in Libya have reminded the world at large of the risk as well as the courage that is involved in photo journalism in contested territories. Argentinian-Israeli photographer Miki Kratsman is no stranger to these, and the Peabody Museum is pleased to support him in this daring and original exploration of ‘the human condition’ in one of the most complicated landscapes on Earth.”