18.10.2012
Gallery
Chelouche Gallery
The collages, which open Tom Pnini’s exhibition “Ballade to the Double”, bear images taken from a series of stereoscopic photographs from the end of the 19th century.
Read more >
Visit Artist Page > 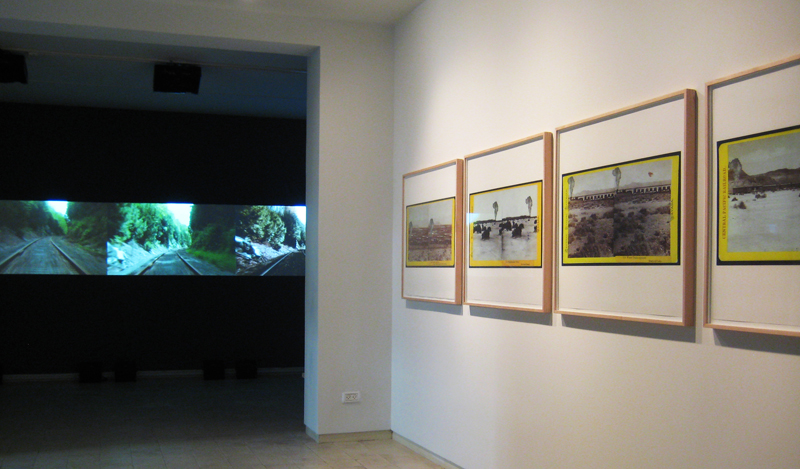 Ballade to the Double | Tom Pnini

The collages, which open Tom Pnini‘s exhibition “Ballade to the Double”, bear images taken from a series of stereoscopic photographs from the end of the 19th century. The photographs follow after the construction of the Central Pacific Railroad in Nevada, USA. In order to create the three dimensional illusion of these photographs, the “frozen” photographic moment is being captured from two almost identical viewpoints. The viewer has to use a stereoscope device which combines the two images into one. As Pnini takes the images away from the stereoscope device, the photograph is removed from its original function and the “by-product” of the magic is reviled and appears before us as a duplication and a double of the critical moment of the traditional photography.

The two-channel video work Double Windsor, which is projected opposite to the stereoscopic collages, is inspired by the famous train scene from Buster Keaton’s The Goat (1921). While the original scene plays on one projection, the other channel features a reproduction of this scene. Now, in addition to the “real” Buster Keaton on the locomotive, a second reconstructed locomotive is speeding towards us with Howard Pincus, the New England Railroad Museum chairman, starring as Buster Keaton.

Throughout the history of cinema, trains have been known as symbols of time and duration. Just as the stereoscopic image created a new multiple dimensional experience, so did the cinematic magic by introducing the photograph to an additional and forth dimension – Time. The Time element is present in the video Ballade to the Double – a journey story which was shot over one year on the railroad tracks of the New England Railroad Museum in Connecticut. It consists of a simultaneous projection of four channels; each channel depicts the exact same train ride in a different season of the year. The rides are projected alongside each other, allowing the viewer to witness the changes in time as if he travels on the train himself.

The train stops several times along the ride, due to an unforeseen interruption: a girl standing in the middle of the train tracks. Her actions trigger chain reactions that create linear acts across the four seasons. We witness her while she plays with an antique toy locomotive moving through the projections from winter to spring, or placing coins on the track, leaving them to deteriorate from season to season under the weight of the passing trains. On other scenes, the girl plays lonely tunes on folk instruments. The actions repeat across the four channels simultaneously, appear as clones/duplicates of themselves, and can be seen as a Rorschach imagery of each other.

Tom Pnini (born 1981), is one of the innovative and promising artists of the young generation in Israel, currently lives and works in New York. His main media are video and sculpture.
Pnini holds a B.E.D for Art and Art teaching from Hamidrasha of Art Beit Berl College and a M.F.A in Fine Art from Parsons, The school for Design, New School, New York.
Pnini received the Outstanding Artistic Excellence Award from Beit Berl College in 2008, and has participated in numerous exhibitions in Israel, New York, Milan, and Toronto.

The video Ballade to the Double was produced with the support of the Center of Contemporary Art (CCA).

For more information, attached below is a selection of articles on the exhibition: