07.03.2009
Chelouche Gallery
Herzliya Museum of Contemporary Art
Leaves and flowers, birds and insects, cobwebs, mold and stamens, earth and ashes-all these are the protagonists of Michal Shamir’s new works. Unheroic protagonists, to be sure. The flowers have been dried, the insects and birds are dead, anything that was once alive and fresh, is now dusty and lifeless.
Read more >
Visit Artist Page > 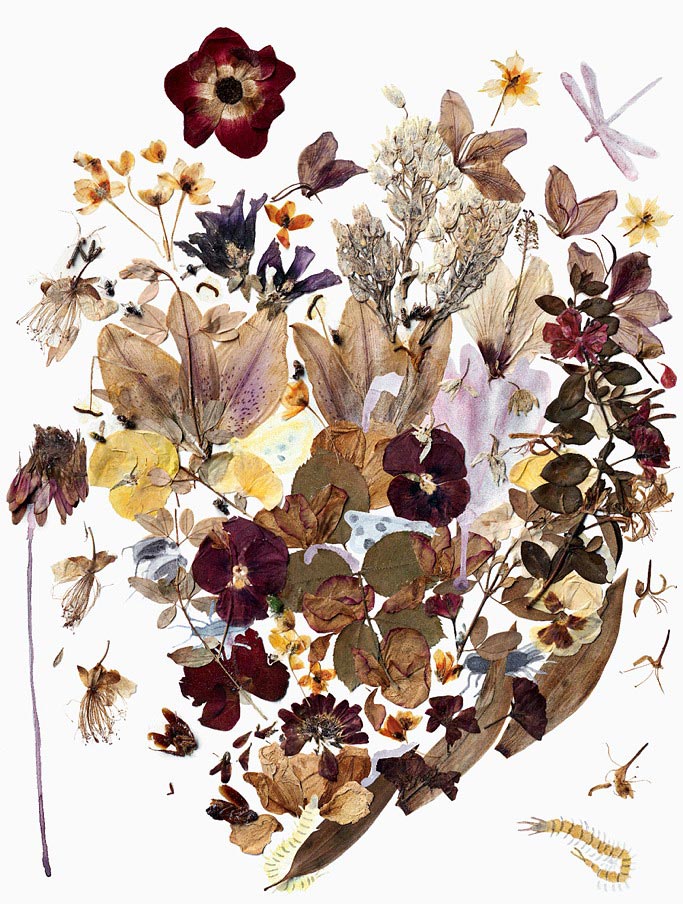 Leaves and flowers, birds and insects, cobwebs, mold and stamens, earth and ashes-all these are the protagonists of Michal Shamir's new works. Unheroic protagonists, to be sure. The flowers have been dried, the insects and birds are dead, anything that was once alive and fresh, is now dusty and lifeless.

The beginnings were different. What started about four years ago as very beautiful scans of dried flowers, arranged like bouquets and inspired by 17th century flower paintings, has gradually transformed into images of disintegration and withering. Shamir's early flower arrangements (two examples of this phase are presented in the show) seem to have preserved their existence in a vase. They were typified by discipline, form, containment, and order. Gradually the bouquets began to break down, and the compositions started to disintegrate. The later scans assumed a chaotic appearance, crumbly and formless. The flowers lost their sheen and freshness. It is hard to believe that they were ever garden or wild flowers, that they bore names (hibiscus, poppy, or anemone) as well as family names (Cruciferae, Compositae). The last photograph in the series is more akin to residues of garlands placed on graves rather than to the magnificent flower bouquets arranged in a vase: earth and mold cover residues of rotting flowers; ants and beetles threaten to overrun them; sand sticks to the leaf edges.

Even in this terminal state, however, the whiteness of the photographic paper bursts forth here and there. Death needn't be emphasized, it is conspicuously present anyhow; it is rather the artificiality of the scene that must be underscored. Wings and petals, spider webs and grains of sand-Shamir arranges all these on the scanner. She works with tweezers and a magnifying glass, cutting and gluing the dead insects, adding cobwebs and soiling the leaves with dirt. Nature is entirely artificial, both in its fresh and in its withering state.

Shamir's modus operandi calls to mind the researcher's or scientist's work, but also children's gluing projects and playing in the mud. The technical act of scanning generates estrangement and alienation: it reconstructs the function of the flower press, as well as the photogram technique, conjuring up the romance of flower drying between the leaves of a book in an era when picking flowers was still associated with love of the land. To the scans Shamir adds drawings, which she executes from observation of plant and insect guides. At first sight it is not always easy to distinguish between the residues of real nature and their drawn representations. The work with guides to plants, like the very act of gathering the flowers and their drying in a book, also embeds the aspiration for knowledge and the will to comprehend nature by studying it; as aforesaid, it also contains a layer of Zionist-Israeli folklore involving long walks and identification of each flower by its Hebrew name. The act of painting joins the myriad acts of gathering, classification, drying, and scanning. Something is being created, and at the same time-frozen and fossilized.

Amidst all the works containing the chaotic, disintegrating multiplicity, two images have acquired a differentiated, singular existence: a pinkish leaf (a rose petal) and a small dead bird (robin) placed in Shamir's hand. The hand gesture is protective, sparing, gathering but also sampling, possibly trying to breathe life into the bird. The isolation of the two images renders them gravestones of sorts; it is echoed in the video work where not even a single image, to which one may cling, remains. The screen is filled with wrinkled, crumbling amorphous gray. The fire burning the papers cannot be seen, only the process of disintegration. Soft gray dying, delicate and velvety like fluff. In Dutch painting, the flowers and insects were part of the reservoir of vanitas imagery. The flowers' beauty and freshness served as a reminder of passing time; the withering, wilting, and decay were present as a necessary “memento mori.” In Shamir's color scans, the photo paper itself preserves a smooth, shiny surface, in arrogant contradistinction to everything taking place on it. The short Israeli spring and the speed in which everything withers add a dimension of local “memento mori.”