19.05.2011
- 16.07.2011
Gallery
Chelouche Gallery
Nadav Weissman “digs” in history, genealogy, and archeology, both collective and private, with a grin of double entendre on his face. His act is essentially optimistic, despite its somewhat morbid appearance at first sight.
Read more > 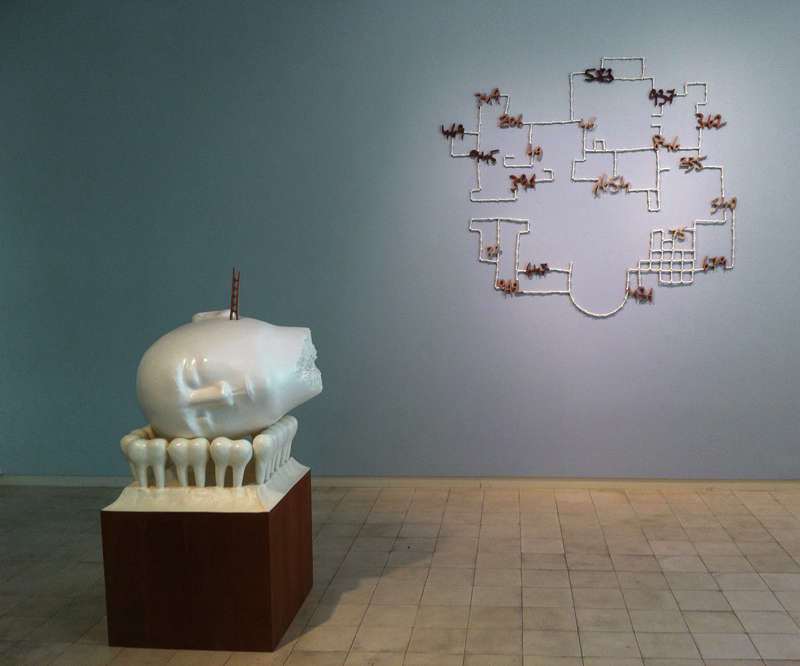 Nadav Weissman “digs” in history, genealogy, and archeology, both collective and private, with a grin of double entendre on his face. His act is essentially optimistic, despite its somewhat morbid appearance at first sight. From the remains of humanity, from the “Dry Bones,” from a world in ruins, he constructs a new world. It is a symbolic construction of a history which justifies our present existence, like many narratives passed on from father to son, explicating some past which justifies a morally, personally, and socially problematic present.

In The World as Will and Representation Arthur Schopenhauer writes: “If the will to live exhibited itself merely as an impulse to self-preservation, this would only be an assertion of the individual phenomenon for the span of time of its natural duration. The cares and troubles of such a life would not be great, and consequently existence would prove easy and cheerful. Since, on the contrary, the will wills life absolutely and for all time, it exhibits itself at the same time as sexual impulse which has an endless series of generations in view.”* The life instinct is a mechanism, and the human animal is inflicted with troubles and thoughts beyond survival. Life contains a desire which is an inevitable process in human thought.

The same applies to Weissman. His recent works locate the process of building a home within a collective context. This process is revealed in the animated film: Weissman’s head sprouts bones. It encounters a woman’s head. Together, the bones and teeth emerging from both heads spawn a “house machine.” Following their interaction he appears to leave the house. The bones emerging from his head transform into a boat in which he embarks on a journey, cruising alongside other heads. The background of this video is a gray tree made with moving simplicity, alluding to early Soviet-Russian animated films. The house, like the boat, is constructed from the head. The body is a type of absence, and the backdrop, which remains unchangeable throughout, likewise presents a contrast to the instability underlying the acts of construction and deconstruction. The head floating in space and the thought become a center which engenders myths out of the body’s building blocks.

Quasi-wall reliefs, the sculptures resemble machines or creatures; moon- and sun-like gears and chains or the faces of various figures, all created through the combination of the bone and tooth images, which appears as though they would shortly be set in motion. The Biblical “cubit”-like scale of the bones, however, always generates a structure or a machine whose dimensions are distorted in relation to human proportions. This scale is always either monumental or miniature, and in any event—exaggerated. The distorted proportions between the various objects and their relation to the viewer result in disorientation toward the new world being spun before our eyes, a world of luring, strange fantastic realism.

Weissman’s figures continue the development of the figures in his previous works, which boasted large heads and narrow, elongated bodies. These creatures, which moved naked in the space, gradually turned tadpole-like; their bodies shrank and disappeared, leaving but a head. In the present exhibition these are bodiless heads surrounded by bones. In some instances, the heads are tributes to formative modernist classics, such as Brancusi’s “lovers”; a moment in which minimum form and matter produces maximum emotion and meaning. The same is true of Weissman. The sculptures’ visibility is minimal, but their meaning is highly stratified both emotionally and in terms of the content worlds with which he corresponds.

Weissman’s view of the family and the ability to interact are ambivalent, since he regards the family as a primary tool which, in fact, constructs a society and a culture, rather than as a collection of organic bodies coming together to form a single unit. Through the motif of the house he addresses the construction and deconstruction of social conventions. The house is always rendered empty, both physically and in terms of the normative contents it is supposed to hold. It is a twofold skeleton: it is made of bones, and inside it (in one of the works) appears the image of a keyboard (continuing the piano image which appeared in his previous works) as a symbol of “culture,” but also as a representation of a household furniture or item. The keyboard-piano plays no music; once again—a sterile form. The house functions as a place of fear, as a potential for human distortion, as a starting point from which everything will change for better or for worse. Out of the house image in this work emerges a schematic dog illustrating how as adults we attempt to fulfill the naïve fantasy depicted in children’s drawings: house, white fence, and a dog—all portrayed as white silhouettes of what they were meant to be; skeletons which assume no flesh.

One of the fascinating new motifs in Weissman’s works is the numeral which appears as an abstract signifier, but in some cases also stands for a date, a number, a period, or an event. The numbers are a means to organize or serially order sections. In addition, they signify society’s development. The symbols themselves create skeletons of sorts, possibly a body or a structure, introducing a strange fine interaction between digits. In 231. for example, one may discern a sequence of movement, personification, and symbiosis between digits which resemble different bodies, like a coupling or an orgy. The digits may be construed as representing the development of a family which, in Weissman’s works, as aforesaid, also symbolizes the development of human society. Thus, 1 may stand for an individual; 2—for a couple, and 3—for a family. On the one hand, a process of natural increase, on the other—a “family” with deviant sexuality, this duality gives rise to black humor which makes the spectator miss a beat as the ambiguity of the Hebrew expression “to do a number” becomes clear.

The viewer’s position is similar to that of the artist. All he has to do is assemble meanings from the collection of vestiges. The vestiges themselves form building blocks for existence, something which like language, is innate to our cultural DNA. The meaning can change in congruence with the different combinations of these building blocks. The proposal for the resulting world remains largely miraculous and coded.