01.10.2015
Gallery
Chelouche Gallery
A jungle in air-conditioned spaces. The works that are hanging from the walls and ceiling metamorphose and transform the gallery’s space. The air-condition soothes the burning of the skin from the outside, cooling the exhibits, but not the flames that rise within them, the violence, the defiance they slam at the viewer. It is just breathtaking.
Read more >
Visit Artist Page > 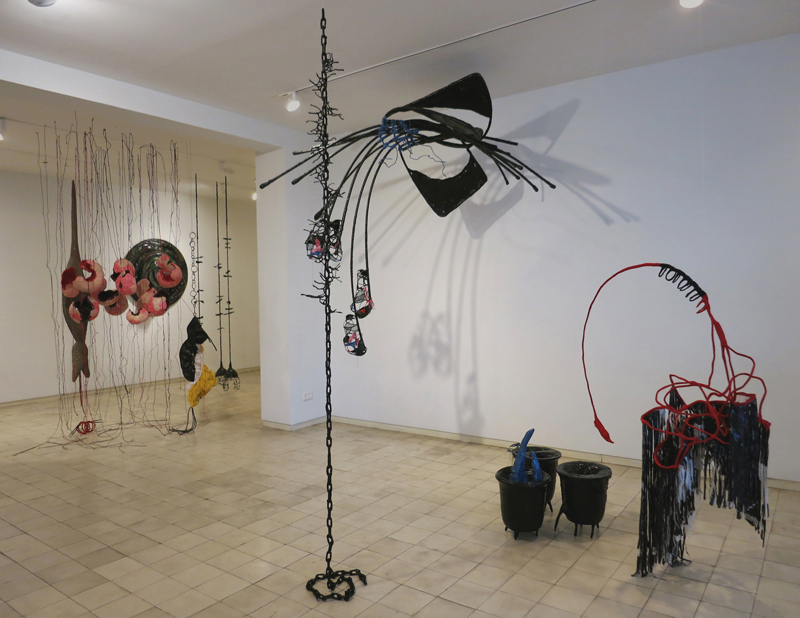 A jungle in air-conditioned spaces. The works that are hanging from the walls and ceiling metamorphose and transform the gallery's space. The air-condition soothes the burning of the skin from the outside, cooling the exhibits, but not the flames that rise within them, the violence, the defiance they slam at the viewer. It is just breathtaking.
Tal's objects converse with the gallery's rooms. They converse with me, just as they did back at the studio, where Tal first delivered them, yet differently. Here, each object acquires a life of its own, to a gaze in the eyes of the beholder.
The density of air, the terror, the swamp, the unveiling chaotic subconscious, will not be settled by the air-condition. The transition from the studio to the gallery resembles the move of a new born from the delivery room to the nursery. All the fear and joys are still hidden within him and amplifying his being into existence.
Notes
In Tal Shoshan's basement studio, the terrible heat from the outside was doubled as it was compressed into two work spaces. The fan was of no use. Inside these blazing hot spaces, hanging, as animal carcasses in a butcher’s shop, were Tal's recent works. It was not a matter of chance that the thought of butcher’s shop came to mind. The objects, some of which were hanging of the ceiling, while some were lying on the floor impacted me. A violent physicality, antithetical to the soft femininity of her former works, is awakened from what used to be game balls, now their insides open and bleeding. Gleaming fabric carcasses of an alligator and a big fish, a giant bird that appeared from a horrendous dream, a green round object appearing to be soft but at its center is a gaping teething hole, as a prehistoric monstrous animal threatening to consume the viewer.
Despite the use of soft fabrics and familiar objects such as football balls, buckets and such, taken from the utilized, everyday-life, sane world, a certain hardness is expressed in these objects, as if they have been abused, distorted to the point of no recognition. Nevertheless, as the body had gotten used to the heavy heat that was sprawling on everything, along with the many hanging objects and their wounds, I sensed another thing. A story that tells itself by these objects scattered across the packed room, in a world of dark yet luring magic, with hints of humor and even grotesque. I felt as if I fell down the rabbit hole and reached/arrived to another wonderland, a wonderland of the mind that is expressed in the physical, as though Tal has peeled the hidden insides and gave them a bodily manifestation, in those industrially produced objects that were changed beyond recognition.
No object is familiar and obvious as it has been before, but had become different or another, which is usually concealed.
The humanized-anthropomorphized objects are in a state of metamorphosis and corruption. Their vigor or virgin freshness have long gone, and it seems that even their partial decomposing state (something about them reminds me of forgotten refrigerated leftovers that change their state of aggregation, their insides and outside mix together as they rot away) is in constant decline. The creatures, which also resemble organic vegetation, are quick to transform; as they rot away they are sprouting new body parts resembling crawling insects.
Yet again, not all is doom and gloom. Tal Shoshan's own bird's-eye view holds an ironic hint to the words of Ecclesiastes: “vanity of vanities, all is vanity”.
The works are thrown at the viewer, like a slap in the face, like life itself, and leave behind them an inconvenient mark accompanied by a magical feeling, even a revelation: this is how it is from within. That is exactly how it is.
Esty G. Hayim