21.03.2013
Gallery
Chelouche Gallery
In “Savage Spirit”, Tal Shoshan takes us on a journey across time, following the feminine body as a territory of western, traditional, modern and contemporary perspectives, polarizing platforms of past and present.
Read more >
Visit Artist Page > 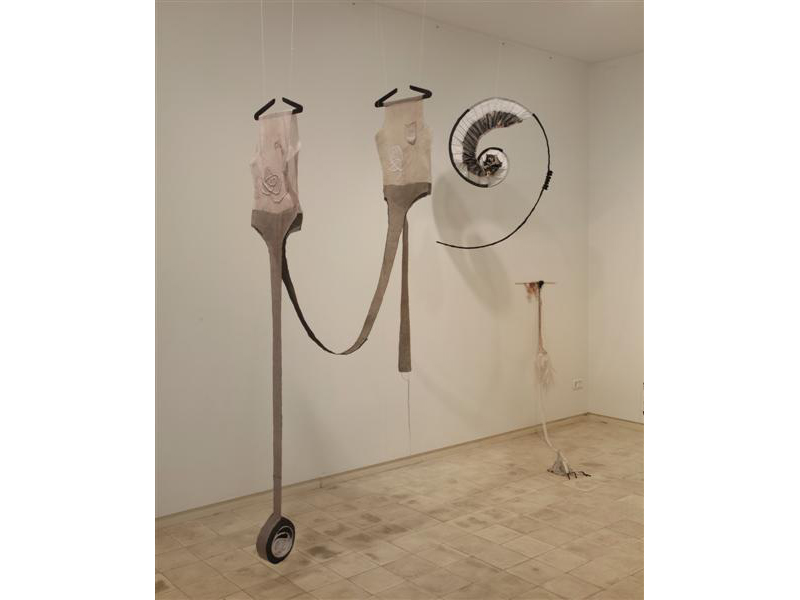 In “Savage Spirit“, Tal Shoshan takes us on a journey across time, following the feminine body as a territory of western, traditional, modern and contemporary perspectives, polarizing platforms of past and present. The traditional role and habits of the domesticated woman; the seamstress, the embroideress, the laundress, the caretaker, whose repetitive actions create a private, protected and familiar space, is set against the artist; whose abject, crafty practices disowned her from recognition. The artist is seeking to destroy the traditional tools, the house and its surrounding walls, to break free into the modern woods and constantly create new world orders. The contrast between the woman as a conquered territory, a land, savage nature observed by the researching gaze of science; and the contemporary, allegedly free woman, who is a master of her own body, observed only by her own researching gaze.

The remnants of the day and materials, that had been waiting their turn, are dropped to her workshop. The artist rolls up her sleeves to untangle the fabric. A huge stir-up of unthreaded strings, spirits and ghosts grows and catches her eye. She gets in between them. The abundance of materials and roles is absorbed into the artist's workshop, which turns into a dark and hidden cocoon-like cellar, or a deserted haunted house that awaits its residents. The artist approaches them and starts to mend: a yarn ball, a mound of cloth, a needle and thread, a bucket of chlorine. She unfurls her findings in the gallery space: an anchor and chain covered with pearls, a spine like sheer dress, an “infusion” vest on hanger-scales, a broken crab shell limping through, an ear funnel, a chandelier of underwater living tissue, a wild cluster of tubes and trumpets. Possibly constructing or perhaps destructing, she follows the unstitched threads, only to discover that it is she who is unraveling the threads while she sews them.

The hybrid objects displayed in the exhibition, show traces of struggle; the familiar and perhaps meditative methods of the traditional feminine handcraft, which served as the dividing line between private and public, are now being weaved into collapse, diverted after a strange, inner, beating sound: the warp and weft creates a grid with unstitched ends, lightweight wooden constructions are broken, yet kept together, by stitches to a cloth or paper, faded colours of fabrics worn off by an aggressive detergent, mixing of sewing threads or wool.

The space is neither safe nor homely; it is a backyard, its future ruins or a dark cellar, those house annexes where its shadows lay. Past materials, future substances, objects in suspension, tools which have fallen out of use or which were never useful in the first place. Raw and cocooned emotions, incorporated in the materials, which were expelled from the domestic territory. Some are full of tension and movement, condensed and crowded yet as still and silent as if possessed by a devil; some full of softness, lightness and endless tenderness, yet any savage wind or spirit, or perhaps the spirit of the savage, will tear them apart.

The silence of this devil's dance invites the spectator to examine the object's details, which embodies the traces of several hinted worlds; codes of cultural maps are being mapped anew. These objects indicate signs of a certain cultural rational, which activate the western gaze on the body of the “others”- the native, the child and the feminine. The colour palette and imagery is also characterised according to this role play as a cultural signifier, but those lose their proportions, blown to extremes or betrayed. Pale shades of pink, grey and yellow, snowy or dirty white are flooded with dark black bursts. The inward contemplations go astray in the space of the outwards look, sailing into the distance.

The clinical gaze maps the body as a land, and the colonial perspective governs the land as a body. These get diminished to exhaustion, and replaced by the artist's perspective. She consumes to oblivion the cartography, the map and its conventional signs, and leaves behind only traces of her individual footprints that pave the roads of her actualized actions. The clinical gaze at the female inner organs is getting out of hand. The organs themselves get disproportionate, overgrown and some grow tumour-like growths. A black and white sewed sketch of tied tubes,

oversized ovaries spreads like eagle wings, a chain of floats or egg cells. The colonial navigation and inspection tools lose track and shape, hang or lay as shipwrecks (the anchor, float chain, lifebuoy) as their objectives (the spirit, the savage, the black, the woman) took over, consuming the image.

Is the artist the spirit, the savage spirit, the black windrose, that overthrew orders and left her mark? Is it the spirit of the savage that she invoked and together they rise up against their maker? Or is it a scientific spirit revealing its savageness? These questions will remain hanging between the shadows of the exhibition.

Tal Shoshan (born 1969), M.A. graduate from Wimbledon School of Art, London (1997), B.A. graduate from Betzalael Academe of Arts and Design, Department of Jewellery & Fashion (1994). Since 2007 she is head of Fashion and Accessories at Kibbutzim College of Education's Design department. Shoshan participated in numerous solo and group exhibitions, amongst which are: “Dreaming of Journeys” at Chelouche Gallery for Contemporary Art, Tel Aviv (2010) (The video from the exhibition was showed internationally as part of ART EXPO); “Phnom Penh the city of Penh” (2007) at Cinematheque Tel Aviv, Haifa and Rosh Pinna, as well as the Panorama of Independent Film & Video Makers, Greece; “Empty Spaces” (2005) at Herzliya Museum; “Public Space” (2003), Helena Rubinstein Pavilion for Contemporary Art, Tel Aviv and “Mother Tongue” (2002) at Ein Harod Museum.