11.10.2018
Gallery
Chelouche Gallery
ShadeDays is an exhibition of apocalyptic memory materialized. Tal Shoshan is creating an ancient landscape that resembles an aqua-swamp space, densely populated with objects that appear to grow from the ground or to be born from one another; some long, their ends touching the ceiling, connecting earth to sky, but simultaneously creating a seemingly looking jail-booth that closes-in on the visitor.
Read more >
Visit Artist Page > 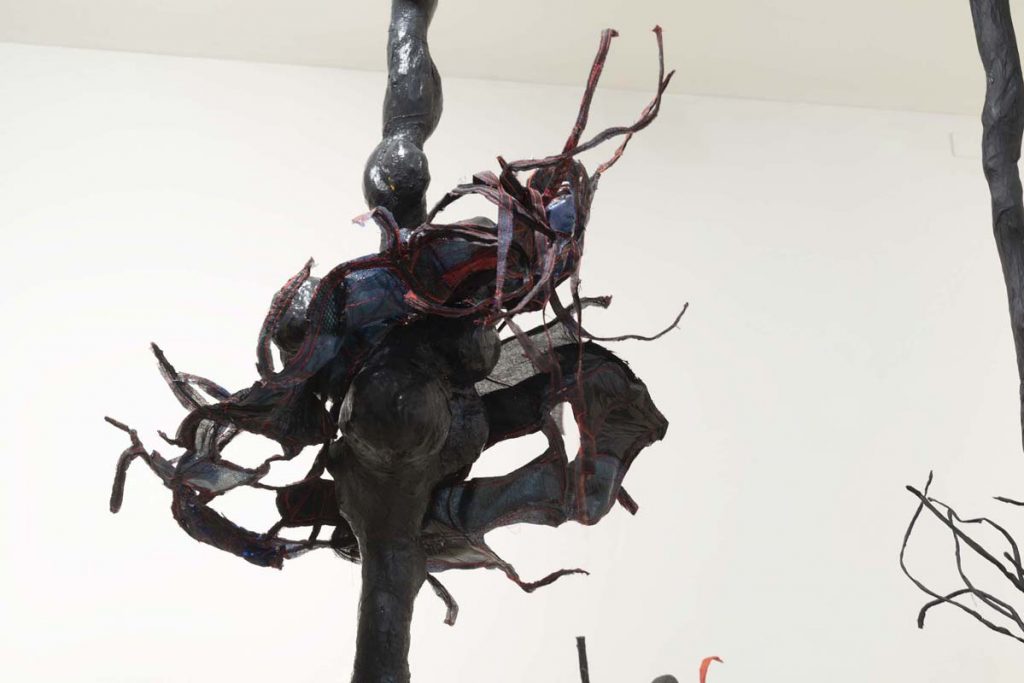 ShadeDays is an exhibition of apocalyptic memory materialized. Tal Shoshan is creating an ancient landscape that resembles an aqua-swamp space, densely populated with objects that appear to grow from the ground or to be born from one another; some long, their ends touching the ceiling, connecting earth to sky, but simultaneously creating a seemingly looking jail-booth that closes-in on the visitor. Other objects are short, in a sort of growth or hewing process, as if stopped while growing, and are now becoming nature’s ghosts, marks in a disaster area. The space invites the visitors and pulls them, like in a horror film, to move inside it, to come close to the sculptural structures, and to observe the infinite revealed and concealed details that constitute them. Is it the thing in itself or only its shadow – that the artist follows and draws in materiel?

Shoshan (b. 1969), a sculptress, performance artist and sketcher, is mapping spaces by creating scenes of relics, of unraveling, of signs. By working with textile materials and different textile practices, together with a unique use of industrial materials, she produces a language of soft sculpture which presents dark environments, both organic and artificial. In each new project, Shoshan situates a journey, or a chapter in a journey, that takes place in space and in the body. The journey always occurs through sculpture that has, at the same time, a light-sketchy and a massive-substantive character to it. The space works on a vertical line, but also clearly marks a horizontal, perspective line, that is sometimes open and sometimes closed, like the present one; a sculpture-space that is a vegetative-animal body which spreads everywhere, but is about to converge into itself at any moment; an object or objects that are extra-feminine but also intra-feminine, mysterious and enchanting just as they are ordinary, simple and completely exposed.

The whole installation is made with Shoshan’s own processing of industrial materials and ready-mades. Here, as before, she uses different kinds of plastics and nylons and melts them in high temperature, with an industrial burner. Shoshan creates a sculptural structure and into it melts the plastic material. The heating twists and influences the surface. This way, an intensive bright texture is obtained, which hints to a synthetic material with organic origins, thus resembling materials such as petroleum, tar, etc. In some instances, she creates veneers with glossy plastic-like texture, using acrylic paints, with which she coats the finished structures.

Her starting point towards materiality in this project is common party equipment, such as different kinds of sparkling confetti and helium balloons. These constitute raw-material from which she installs new surfaces. In this way the plastic paper crumbs or the aluminum paper crumbs called “confetti”, were mixed with paints and glues and were brushed on a textile material. After it dried, the confetti became part of the surface’s texture, and was easier to work with as a soft textile sheet, from which Shoshan
created shapes and structures using cutting and stitching techniques. The radiant helium balloons were randomly stitched as a “sandwich” between cloth, sponge and silk paper, thus becoming a new surface on their own, when it is possible to remove the upper layer of the paper in a wet pilling process, and to discover the radiant color underneath.

The textile allows Shoshan to create a space of multitude and creation, of ambivalence between the body of works to the body of the viewer, between distinct shapes to fluid shapes. Through the space’s flexibility and strength, its being created and embroidered but also unraveled and disintegrating, Shoshan marks states of instability and destabilizing exposure, and forms objects that move from the realistic to the fantastic and the surreal. Together they map spaces of allegorical strolling that are on the verge of existence – traumatic, anxious and sensual. “Midway in the journey of our life I came to myself in a dark wood” writes Dante Alighieri in the beginning of the Divine Comedy, before his allegorical journey to hell, purgatory and finally heaven, when addressing both the dark reality of his time and his inner, emotional and mental state.
The black color is the primal experience of ShadeDays. It is to be found in every chapter of Shoshan’s journeys, but here it floods everything and leaves no empty space. It is the black of smoky fire remains, of swamps, of linear, tangled compressed illustrations, the black of shades. Shoshan is making the tension between the light and the shade, which is at the heart of the artistic act and the human personality, be present. There is the old familiar anecdote by Pliny the Elder, which deals with the essence of the act of painting and the origin of art, and tells the story of Dibutades’ daughter, who drew her lover’s shadow just before he left to war; Whereas Carl Jung talked about the shadow experience as representing our other, dark side, which is inseparable from our mentality as a whole.

As you go dipper into the black wood its elements are exposed, a collage made of materials and images, in which, at first sight, the objects seem imaginary, fantastic and even abstract – lines and shapes that create themselves and are being created out of themselves, parts of images and drawings in space that create entanglements. The black receives traces of other colors, blues, reds and yellows. Slowly-slowly we recognize familiar birthday signs – balloons, birthday crown, neckless, pennants, cards; fragments of plants and animals – fish bones, birds, spider webs; human fragments – a foot, palms, tongue; parts of texts and words, scattered letters losing their meaning; plastic, synthetic, non-degradable, toxic materials, combining organic suggestions such as papers and strings.

The mud covering the eyes in the previous part of the journey (i.e. the exhibition Mud Covered Eyes), is now total. The mingling and the blurring of the natural and the artificial are much bigger: the artificial becomes natural and the natural is almost completely assimilated, leaving faint, but nonetheless threatening, marks. The party is not a party, and the concern with femininity is now a worrying parenthood: how does one celebrate a birthday in a chaotic, unstable world, filled with disaster scenarios. But it is also a current, encompassing mental space. Each plant and each object in the exhibition is actually a person, a living being that was being pressured until it grew into something else, but is still left with signs of its previous self. Whoever enters this dark wood is seemingly entering himself by force, chewing in the oral cavity, trying to taste, but the black teeth disintegrate.