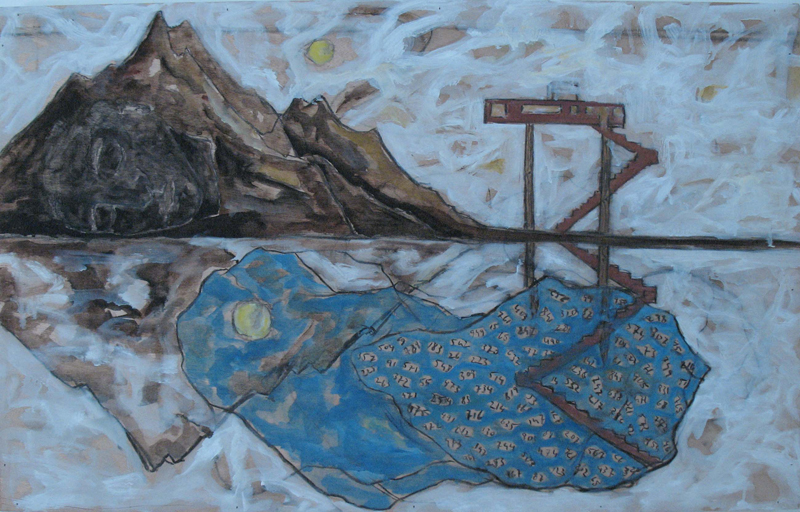 A Labyrinth into Personal Archaeology

A walk through the studio of Weisman in Tel Aviv in early September 2012, and its transition ‘overseas’ into the gallery space in Miami, ignites several directions of thought and reflection on the artist’s current work.

Weisman’s interdisciplinary installation invites the viewer into a space that holds two realms of experience at once: a labyrinth and an archaeological site. We as spectators, or visitors to this space eloquently must move around the space, as we undergo a process of excavation, deciphering the iconic symbols around us: a house, a head, a body, a ladder, numbers. Weisman entails in his work a process of digging and exposure, of a personal and cultural terrain, reminiscent of desert landscapes where removal and filling take place.

Inside this space, we are taken into a labyrinth which we must decipher, as it is inside labyrinths where a clear route that takes the visitor into the center where the ‘truth’ is said to be found. These labyrinths appear at times in dreams and may represent notions of misgivings or uncertainties. Usually it is difficult to find the access point into the labyrinth and difficult to escape it, legends say it is only the sage one that can find his/her way. The labyrinth may incite confusion or a sense of disorientation – represented in Weisman’s center piece and ladders around the gallery – one can approach but cannot walk inside or through them, as they are minutely small, narrow or misgiving to a promenade within them.

Weisman is closely connected to his home-town Haifa, a port-city, industrial in character where the working class was a prominent layer of the population, where the ocean is always at the view of the spectator, yet at its skyline is filled with a view of large ships, transportation hauls, and a growing number of business office buildings. Reminiscent of the urban and natural landscapes of his hometown, Weisman in his special experiences juxtaposes painting, sculpture and installation, embedded as one body of work, interconnected to each other. This core element of his oeuvre embodies layers of reflection and perspective characteristic of the Weisman signature language that he has developed over the past decade.

Colin Renfrew, the prominent British archaeologist, claims that the archaeologist, much like a visitor at a gallery of contemporary art, attempts to make sense of and to figure out the material world in front of them, be it an art installation, or the objects, the artifacts and buildings unearthed from an archaeological excavation. But he also alludes to another kind of relationship: the archaeological process, according to the author, can be seen as art production, through the features created on the ground by expositing old structures and creating news ones, but also through material practices, such as photographing archaeological features, objects, and landscapes and producing texts about them.

All in caves, enclosed, usually lacking openings for escape, it is only through harsh digging that we as spectator can enter Weisman’s world and find a head, a house, numbers. In the practice of preservation and conservation of archaeology each artifact or specimen is numbered with a small ticket, usually hidden from the viewer’s eye. Here it seems as the numbers the artist has accumulated, perhaps each symbolizing an archival/archaeological specimen of his own, is buried deep inside the earth provoking also thoughts on death and mass burials, yet at the same time igniting a sense of terranial life.

—
Danna Heller is an independent art curator based in Tel Aviv.

Colin Renfrew was Master of Jesus College Cambridge, and later as director of the MacDonald Institute of Archaeological Research.

Plywood is, by American standards, a legitimate, if somewhat precarious, construction / building material. It is also the chief component in Nadav Weisman’s solo exhibition, his first in the US. In the hands of a skilled craftsman a truckload of plywood panels may turn into a house. Once occupied, a house begins to accumulate the presence of its human tenants until it acquires that elusive quality that turns it into a home. In the context of Weissman’s art the occupation of the houses and tenement buildings that dot his paintings or make up his sculptural installations is never quite possible. Although his oeuvre may very well be described as an ongoing building project, the architectural structures he creates remain desperately vacant. This pathological vacancy is one of the elements that infuse Ups and Downs Landscape with a subtle sense of melancholy. All of the artist’s imagery – the makeshift architectural gestures, horses’ and human heads, the lakes and ponds and swampland, the ladders, trees and roots – seem ‘hollowed out’ like dissected memories inside the cavities of the mind.

There is a stark contrast between the richness of Weisman’s arabesque-like imagery and the matter-of-factness with which he renders it. His is a rough painting, lean and bonny, so to speak. His work is rapid and straight forward, as if carried out by someone facing a torrent of images he must capture with great urgency and frugality, leaving out all that is unnecessary for his ‘geographical’ report. It is tempting to tag these works as “necessary cartography”, where the images convey the very process of recording only the fundamental information onto the plywood surface.

Rather than a thorough rendition of a visible landscape, what we get here is an express transmission of an internal one, a swamp-like world with cavities and caves in which images of considerable suggestive power lie. The atmosphere reminds us of the primary Freudian assertion whereby what lies beneath the surface is always as important, if not more important, than what is visible. A horse’s head is not merely ‘lacking a body’ but rather is an image of amputation, charged with symbolic meaning which renders it both highly personal and universal.

The swampland, the archaic symbol of Time immemorial, is presumably a magnet for two types of personas, initially at odds with one another. For the restless, free-spirited Pioneer, forever drawn to the mire by the sheer challenge it poses, there are but two options: to conquer that untamable ‘virginal’ wilderness or to die by its dark spells, breathless in the rotten-egg stench of its ancient bosom. For the pensive, melancholic poet, the swampland is the sad goldmine of his own melancholy. And it is never ‘a virgin’: as Weisman’s works show, the swamp, and at the same token any landscape is always laden with images, dreams and memories. So the artist, just like the territorial Colonialist, might find himself knee-deep in the mud, but for entirely different reasons. Where the first seeks to do away with the marshes by drying them out, the latter digs-in laboriously as the swamp calls him to uncover what is buried beneath its slimy surface. To put it plainly, the artist needs the swamp, metaphorical or real, because ‘unearthing’ it is where his work to grow from. He may dig-in, but he’s not in the business of draining.

Weisman’s other important medium in this exhibition is mud or rather translucent mud, at once concealing and revealing. The tension between concealment and revelation is what renders the Erotic visible. In that sense the artist’s landscapes are utterly auto-erotic, and bear a sense of irony that is a terribly private one. One may even call it a tragic irony: the irony of a Dreaming Head which appears. In its tautological cyclicality, which portrays the dreamer and the dream as one and the same, Weissman’s world is rather like a child’s dreamland, enclosed and self-sufficient. The artist is, then, both the child and the adult here, whose mastery is precisely his ability to conjure the private symbol out of his own psyche and render it public. In this sense, we may approach Weisman’s body of work as we would a coming-of-age narrative, a bildungsroman in which the author/artist renders his internal landscape visible in order to make sense of the troublesome outside world.

The three dimensional works in the exhibition are rather different than what the artist had produced in the last decade or so. In his previous sculptural installations Weisman had carved a private universe for himself, inhabited by bulky sculptures of child-like characters. His room-size works portrayed a world that pivots around the child’s onanistic play. With their un-proportionally large heads, his ‘children’ were the quintessence of puberty, stuck halfway between childhood and maturity. In other words – they were hybrids, forever engaged in a game of jackstraw or riding broomstick horses. They were the actors in the his mini-dramas, which he fashioned out with great detail, perhaps as a means of an obsessive self-examination.

The fragile reliefs in Ups and Downs Landscape suggest the maturity of someone who looks at things from a distance, a temporal rather than a physical distance, as if remembering things past. If examined in an autobiographical context, these architectural sculptures may provide valuable reading of weissman’s world. In most cases these reliefs either remain tact to the wall, or hover a few inches above the ground. In some cases they protrude into the three dimensional air, like thin trajectories, the specters of some anonymous urban landscape, suspended in mid air. This delicate physicality of suspension between the discernible image and the abstract gesture, is equivalent to the metaphorical quality of his early work, that sense of being in-between ages. Here the adolescent-baby, stuck between worlds, is replaced by images of houses that are suspended halfway between ceiling and floor, as their plywood bodies attempt to defy gravity.

Perhaps this makeshift architecture is reminiscent of the city of Haifa, Weismman’s native town in the Northern part of Israel. It’s a city of paradoxical nature, utterly modern- and laden with history, a symbol for Jewish-Arab co-existence, yet constantly watchful for the possible eruption of the age-old nation, ethnic and religious tensions. Built on the western slopes of Mount Carmel, Haifa’s morphology is a direct result of the mountainous geography of its surroundings. Its downward movement towards the Mediterranean Sea and the port area results in its division into an upper town and a lower city.

This up-and-down geography may be discerned in Weisman’s basic rendering of his landscapes, and, more importantly, in the fundamental division between what is above the surface and what is buried sub-strata. One is tempted to identify his preoccupation with the Freudian model of the soul with the very surroundings of his upbringing. This interpretation should, of course, be taken with a grain of salt, but the image of a city suspended in mid-air is undeniably a fundamental one in the show. The entire ‘landscape’ of the exhibition seems to stretch between the horizontal and the vertical, above and beneath a horizon line that separates the upper and the lower worlds, and between the opposing forces, ascending and descending Weisman’s bridges, catwalks and ladders.

I’d like to stretch this line of thought a bit further, hopefully without jeopardizing its mysterious opaqueness. As we return to the lonely houses that would never be homes, which Weisman carefully places above the ground, it may become clear that what is buried beneath them may very well be the reasons these houses can never become homes. Like the modern house build on the ancient cemetery in countless horror flicks known to every American, Nadav Weisman’s houses are forever haunted by the very images and objects he digs up from underneath them.

Avshalom Suliman is an artist and freelance writer based in Tel-Aviv, Israel