We are a Bound Family

01.01.1996
Chelouche Gallery
The Kibbutz Art Gallery, Tel Aviv
Curator: Tali Tamir
Between the “holly family” and the “bound family” separates, in the work of Tal Amitai, a safety belt and a slogan of the Ministry of Transportation.
Read more >
Visit Artist Page > 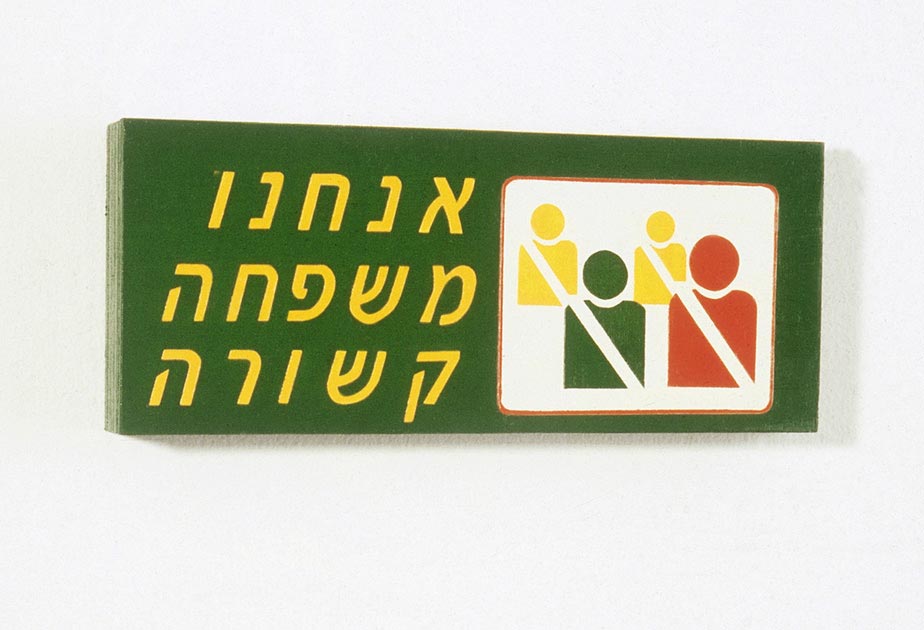 “Tal Amitai: We are a Bound Family” | Tali Tamir

Between the “holly family” and the “bound family” separates, in the work of Tal Amitai, a safety belt and a slogan of the Ministry of Transportation.
Amitai attacks the question of the family – one of the central concepts in the Jewish culture and Israeli society, a concept that grows every year during the holidays and that is still a taboo – few, certainly in the field of plastic arts, have touched it on such a direct level.

Amitai moves around the “soft belly” of the family – the dinner table. She paints her father dipping in a soup bowl, floating between parsley crumbs. At his side her mother, immersed at the bottom of the bowl, under a pile of spaghetti in tomato sauce.

Helpless they are positioned between the knife, spoon and fork appropriately set on the checkered tablecloth (the father) or on a floral oilcloth (the mother).The rules of the set table, the table manners and food, contain within them the entire family metaphor: not only the control means of the parents over the children through food and feeding, but also the predator-devoured relationships and the potential of destruction and oppression lurking, in every family, somewhere under the folds of the tablecloth and among the hidden layers of the subconscious. Cannibalism of inter-generation and inter-familial battle of power.

In a series of sculpted works done in the late 80’s and named “The family”, Daniel Zak portrayed the arbitrariness of the familial connection when he drew a thin metal line between a rancid drop of semen, undefined, and the image of a human fetus.
Amitai is much more blunt than he was: when she continues to walk on the thin line between the micro and the intended, she scatters kernels of rice (she actually paints the scattering of the kernels) on a Hebron marble plaque, found in almost every Israeli kitchen typical of the middle class, and from the kernel scattering the writing becomes clear: “We turned out fucked”.

The familial relationship mediated through the simple imagery of common food (which family does not eat rice and meatballs?) is revealed in its other facet and exposed as a complex and vulnerable system, seeping way beyond the daily chore of cooking.

Motifs of cannibalism, between parents and children, are known in the mythological dimension and we could mention the fear striking painting of Goya describing the god Saturn eating his sons. Amitai, in a Freudian-macabre spirit, more than a mythological one, turns the motif upside down and expresses death wishes and aggressive impulses directed at the parents. Amitai does not build a scenario of fear and terror but rather, confronts the myth of familial connection with games of chance and gambling like the Lottery and jackstraws: scattering the jackstraws is like scattering the human semen – random, arbitrary, uncontrolled – you need Lotto in life in order to win the big prize and in order to be born in the right family. “Luck is after you” – like in the slogan of the Lottery, quoted in one of the works.
Amitai gambles for luck out of the maze of the familial connection. She allows herself to untie the “safety belt” of the family and cast her own private lucky cards.