You Do Not Know

05.12.2003
- 16.01.2004
Gallery
Chelouche Gallery
Curator: Nira Itzhaki
You Do Not Know includes a series of eight photographs which where processed through a computer and the 5 minuets long video- High Noon.
Read more >
Visit Artist Page > 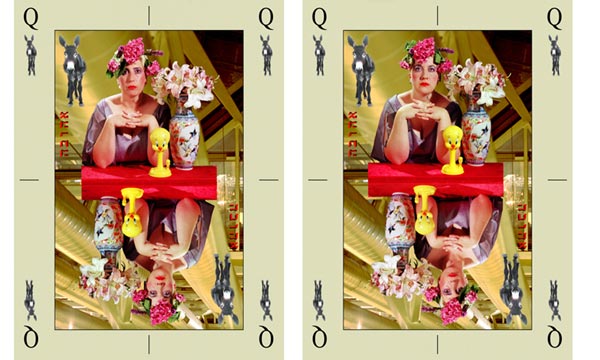 You Do Not Know includes a series of eight photographs which where processed through a computer and the 5 minuets long video- High Noon.

The Photo series include eight Queen cards, Q cards, based on the card illustrations of Zeev Raban, in which the artists transforming themselves instead of the original figures. The biblical names of the original cards (Judith, Bat Sheva and more) are switch to well known adjective Israeli names with conditioning character: Levana (white, as an adjective of a woman), Ahuva (beloved), Yafa (beautiful), Nechama (comforting)- names that connote a soft, delicate, feminine image that are confronted both with the artist image and the usage of this names in everyday speech. In addition the card’s signs where exchanged: red heart, diamond, black leaf and clover became donkey, coke, cat and ostrich.

The photograph examines the image of the two artists in gape between the title and the image. The visual surroundings are full of iconologic, colorful formative noise performing an act of aggression and excess on the viewer’s eye, a form which is only partly comprehended, and which produces a fantasy of television and film that accelerate our dreams. The biblical/ mythical figures that occupy the cards become secular and earthy by the implanted presence of the artists’ and vis versa, the secular image of the artists become mythical and pathetic. The pathos as a cynical, critical point of view of the artists at themselves, is expressed in the eye’s lack of ability to consume everything, and in the incompetence to fulfill the fantasy.

In the video High Noon the artists appear dressed in similar masculine suits, breast feeding with fake breasts in a eucalyptus grove, as they confront the breast-feeding scene from Pausolini’s film Oedipus Rex. The artists imitated the exact camera movements and order of shots, so that the structure of the scene and its theme remains the same. The difference is expressed in the artists’ feminine/ masculine image in contrast to the perfect woman/ mother figure in Pausolini’s film and in the exchange of the beautiful pastoral landscape in the local shabby eucalyptus grove.
The artists point out abnormalities against the fantasy/ stereotype, out of the conflict of rebellion against a well-predicted recurrence: education, marriage, and children. A constant confrontation and examination of the female image, here also through motherhood. The local Israeli existence is expressed in the musical and textual choices, and function as a further conflict within the definition of femininity, country or homeland as an additional stereotype of a woman.

In the center of all of Alona and Limor’s works is the multiple and mutual feminine entity, as through the use of the similarity and through duplicating their gestures and action they create a single combined artistic being in which they operate as two identical reflections. Their figures, positioned mostly in an theatrical scenery, assume their feminine identity as a kind of costume and play with different archetypes (a golden apple from children’s fairytales for example), while using references and quotes of art history, movies, radio and television.

The twosome image is an essential part of Alona and Limor’s work and returns like a signature, a symmetrical kind of esthetics, through which the artists touch their feminine representation in deferent forms and with great humor and irony.
The choice of duplication, of appearing as twins, hint the question of the two’s partnership of fate, partnership of difference. On one hand the duplication creates an empowerment and legitimacy of the alternative female image suggested by the artists, and on the other hand, it creates a sort of parody of the image itself by confronting it with the visual norms of the female stereotype that exist in contexts such as film, television and photography. In the gape between these extremes a specific, personal and complete femininity is discovered.